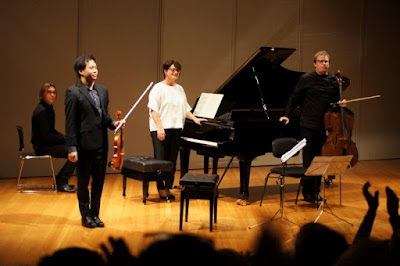 Selby is an uncommon pleasure and closely followed by a cohort of the local classical audience. She does a program that tours much of the nation, playing in Canberra at the NGA theatre. It's chamber music, done with obvious skill, in small groups. This was a trio playing two piano trios and duos of piano with violin and cello. The players were clearly superb. Kathryn leads it all from the piano. Her colleagues for this concert were Nikki Chooi, Canadian violinist, and Timo-Veikko Valve, Scandinavian principal cellist of the ACO. No slouches. The program was an interesting modern piece, Julian Yu Prelude and not-a-fugue for piano trio, obviously a play on Bach and featuring the B-A-C-H motif in the second movement. Also, Schumann, Brahms and Schubert. All richly played with nice communication, informative intros and some smiles. I chatted with a cello player in the break and we had both commented on the bowing and some strings choices (low strings played high on the neck for a deep feel, I think in the pained Brahms) that were instructive. The clarity and openness of both sound and intent of such a small group is something special and a drawcard for small chamber ensembles like this. Selby doesn't come cheap, but she has an ardent following and she provides the goods.

Kathryn Selby (piano) played with friends Nikki Chooi (violin) and Timo-Veikko Valve (cello) at the National Gallery.
Posted by Eric Pozza at 11:54 am