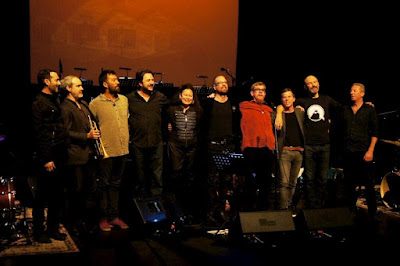 A suite is a big view and not very common in jazz, but Stu Hunter does them. The migration is the third that he's composed and recorded and the first that I've heard on tour. We were lucky enough to catch the final night here in Canberra, after performances as far afield as Perth and as illustrious as the MIJF. The final night mostly has the best awareness of the music and the most delirious pleasure in playing and that's what it seemed to me this night. Not least aided by the Canberra connections, through frequent gigs or teaching or studying at our School of Music in its illustrious past. I assume there's also family here for some of them. I could only admire and wallow in the deep, often minimalist grooves, the sometimes raucous horn parts, the heavy rhythms or detailed drums or essential, busy, feathery e-bass, or Stu's directorial piano segments or Tina's blues-infested voice that stepped through lyrics in three component songs of nine tune/movements. I couldn't catch all the words and these would be essential for the theme; reading them after from the CD cover I'm still not hugely more confident in my interpretation. 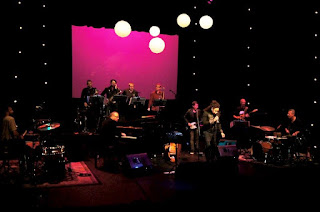 The migration seems a broad story of life, a "celebration, conversation, a comment and a wish ... my own life process put to music ... questions instead of answers ... movement of ideas and beliefs ... and growth and sharing of culture and ideas". That's a broad palette for the theme. The music was broad too, as well as virtuosic (although no surprise on the virtuosity given the lineup). Bass was core to the work. It started with a wah bass solo then a driving dirty bass with overlying yearning horn themes. Then a heavy groove with Afrobeat horns; a short pensive section; the theme laid out with voice on Twelve stages of freedom. Requiem for belief was a written four part horn tune (including tuba) with drums accompaniment (think Nino Rota). There was a piece outlining flowing water then a piano-heavy ballad speaking of love; an ecstatic blues/funk song with words of moonshine but themed of the joys of life lived. Finally a klezmer-like ending called Land of Gypsies, instrumental and outgoing and open to the world. Nice to see the migration was ultimately well-received by the composer. It was certainly well-received by the audience. I hugely enjoyed the grooves, head-nodding for long passages (there's a lot of music here to dance to), the horns were great, the rhythm section was wondrous, especially Cameron Undy (local origin, now Sydney), very busy on a uniquely lithe bass (short scale Fender Musicmaster with split pickup?), and Simon's insistent drumming, Tina's voice was intimately bluesy and powerful with heavy vibrato. And Julien's bass clarinet, amusingly sometimes sounding of didj, Matt's much restrained solo lines breaking into flurries, James' playful virtuosity on tuba and everything else he touches, Phil's calmly explosive precision, Carl's occasional guitar (I remember just one larger solo this night, mostly lost in the mix to my ears) that can plumb real musical depths, Declan's insistent rhythms that established more than one tune, and Stu's guidance and oversight from the piano stool and sharp solos and penetrating comping. 80 minutes that entranced and involved and passed with ease. In the wake of the like of Mingus and Carla Bley, Stu Hanter has produced his third large format compostion and it was a wonderful, engaging success.

Having seen the premier of this work in January at the Sydney Festival and buying the CD I was delighted to see this preformed at the Street. There were some subtle musical variations which added and expanded upon the work. Its a remarkable piece of music and its pity that the audience wasn't larger to see what is one of the best extended Australian Jazz compositions come to life in all its vibrancy.