A time for silence 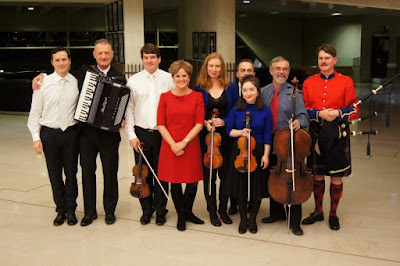 The title and the theme were sacrifice and the sub-title was Lost songbirds of the Somme. This was another of Chris Latham's investigations into WW1 with the support of the Australian government (100 years of ANZAC) and various other embassies and institutions and departments. All part of the Flowers of War project. This one explored a string of composers from both sides who partook at the Somme and who mostly died there. There were songs, of lost fellows, of girls left behind, of memories of home, elegies and laments and war sonatas and death.

Not too much of valour in battle; perhaps the piper came closest to that, given a piper's role in those days. There were pieces well known by Australians and others and many lesser known. There were instrumentals amongst several songs. The concert itself lasted 90 minutes and the request for no applause between tunes lent it a pensive air which suited well. The British High Commissioner recited the Ode of remembrance with some emotion. The Ode is longer than the commonly cited Australian version ("They shall grow not old, as we that are left grow old / Age shall not weary them, nor the years condemn / At the going down of the sun and in the morning / We will remember them"). The HC narrated two of seven verses from the original, excluding some specific references to England. Then a minute of silence, the Last post sung by tenor and a final bugle call. With the piper and the lofty Cathedral-like space and following over an hour of tragic memories, the room's mood was palpably affected. The musicians were impressive, intoning and bowing with lovely precision. Just 3 violins, viola, cello and accordion, sometimes with voice, so the music was clear and open. My favourite was FS Kelly Elegy, but only because I know it well, and his Somme lament. The whole was bathed in pathos which most showed in some songs. Like Suzette, presumably an ode to a lover, but displaying little joy amongst its dense Edwardian romanticism; or Gurney singing that "I'm homesick for my hills again"; or Gurney again by a bierside "It's most grand to die / most grand"; or Ibert's strained attempt at recall of home and hearth in his Noël en Picardie. Then to end, the walking piper coming down the High Court ramp growing louder as he approached, and the Ode and the Last Post. It was touching and quiet and beautifully presented and some superb performances (including some thoroughly impressive piping). And a printed program that was a work of both history and art. Congrats to all.