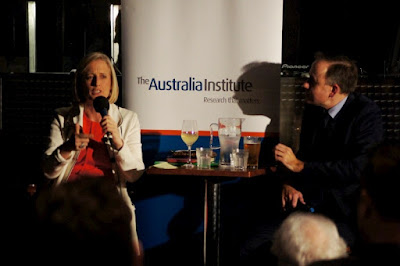 Katy Gallagher spoke at a Politics in the Pub for the Australia Institute. It felt like she took the opportunity to relax, this being an audience somewhere near her comfort zone, and this being Day 44 of a long, long election campaign and (a few weeks yet to go) and she's given plenty of recent speeches. On top of that, I had to run off before most questions, so even less to report. Her theme was common questions she'd received, and these were mainly about her move to Federal politics and the Senate. She has no regrets; she felt she'd done everything she could in ACT politics; she would have been in ACT politics for 19 years by the next election and in have acted in most ministerial posts. Her decision followed a COAG meeting where Abbott reneged on agreements for funding health and education, so she decided Federal level really mattered [I wondered how she could have thought otherwise]. In addition, Shorten had healed and pulled together a strong team. She spoke of huge differences: close vs. removed relationships; a different engagement with the media; gotcha politics. Interestingly, she observed the Senate was "the most sexist workplace she'd worked in" [then felt no inconsistency in the talking of "mansplaining"]. She has now found her feet in the Senate and looks forward to 2 July. She notes the difficulties of federal policy: "wicked political policy questions are hard". Gotcha politics undermines conversational styles and promotes set massages. The difference between being involved in all decisions as Chief Minister to being just one of 80 backbenchers. Parliament House as an "isolated environment" of essentially FIFO workers and the gruelling task for MPs from WA. Satisfyingly, a positive comment on the commitment of MPs despite what (little and controlled) we see. All interesting but nothing startling; then of to record at Smiths.

Katy Gallagher (ACT Labor Senator) spoke at Politics in the Pub for the Australia Institute.
Posted by Eric Pozza at 3:01 pm