Right on the night, again 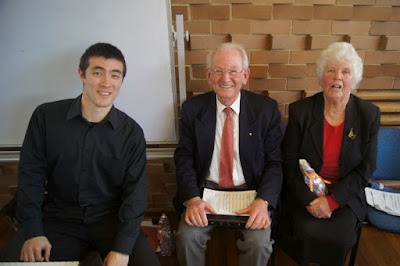 "She'll be right on the night" is a favourite line of mine. It's jazzers' wisdom but it's recognised by all manner of musos and I find it's usually right. Harmonia Monday proved it right again just a few days ago; as it did at a previous gig. HM meets weekly and performs, as noted by our secretary at the gig, as an open day rather than a concert, but concert it was with audience and some little nerves and a need to get it right this time. Mostly we did and it was a pleasure. HM is an SATB choir (although occasionally doubling some parts), heavy on altos and light on tenors (common enough). We sing all manner of music. This gig had several movements of a Palestrina mass and the Mozart Requiem, a Bach fugue, Reger and Pinsuti for the florid dynamics and Copland for the earthy Americanism and the fun (although I personally had some considerable difficulty with one line in the song "I bought me a cat": he also "...bought me a wife"; very questionable). Otherwise, the harmonies, energy, intervals weren't all perfect but presentable and way better than even the warmup. It's amazing what the gig can do.