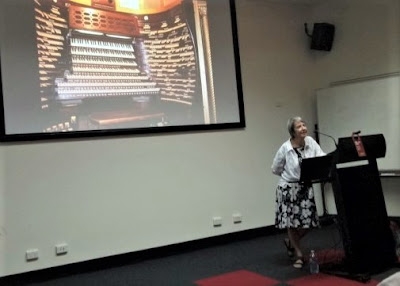 Jenny Setchell is wife of Martin and his page turner, photographer, recorder, stop setter and partner for their tours to pipe organs around the world. Once a journo, she’s capable writer with considerable wit and a good eye for the photo and the plot twist. She’s just released her second book on the organist’s life and she presented it to the Festival. Some instruments are to die for (for access but also for immense beauty). We saw pics, heard of the travails of a travelling organist and the pleasures of the audience. Every organ is different; you require an hour in preparation for every ten minutes of performance; there are from one manual to six or more plus pedals; then the string of stops, all named inconsistently; the access might be through mediaeval tunnels or rickety lifts or dangerous spiral staircases; communications may be by TV or mirror or none; pistons may group stops as an aide; sequencers have arrived on modern organs to manage set sets of stops; consoles can be machanical or electro-mechanical and detached; the cipher may come at any time, when a note refuses to stop playing (a great fear no doubt). There’s more. Then to fill the hour, a visit to their native Christchurch in NZ, once location of 77 pipe organs but now, after several earthquakes and 20,00 aftershocks (into Richter 6/7) only 3. We all were saddened by and for them. An interesting view of organs and organists at this organ festival.