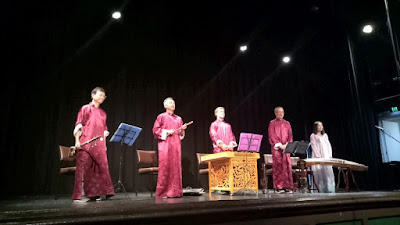 I’ve talked several times of different styles at this festival but this takes the cake. The penultimate concert was the Australian Chinese Music Ensemble playing traditional music of China (and Danny Boy and Click go the shears). It’s a fascinating and diverse sound for our ears. We’ve mostly heard it before but even so, getting some chatty background and hearing the individual instruments playing solo and especially being invited on stage after to see their scores and instruments close up and ask a few questions was fascinating. We heard of the pentatonic nature of the music, how it’s mostly now written with a number notation (jianpu) with dots above and below for octaves and a second stave for accompaniment. The pentatonics are comfy for us but the vibrato and pitch bends are strange sounding as are some tones. The core group was four males, joined by a woman for a solo on Guzheng.

Interestingly, this instrument is mostly played by women and , at least here, she played solo. But then retuning is not trivial. Suffice to say, very different from the rest of the festival, informative and satisfying.

The Australian Chinese Ensemble performed at the Ballarat Mechanics Institute. Wang Zheng-Ting (director, sheng) led a group with instruments dizi, erhu, yangqin and guzheng (names not provided).
Posted by Eric Pozza at 10:53 am