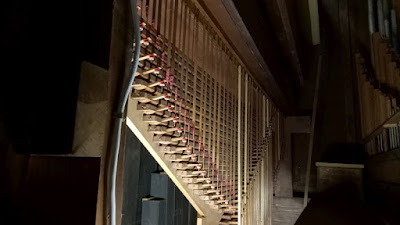 Next up was Douglas Mews, another NZ organist (it was noted!), playing another early mechanical action organ after further last minute repairs from Ken. Douglas actually played one short concert twice, although opening all stops was only attempted n the first run. Apparently the bellows weren’t up to it. This was music from the Fitzwilliam Virginal songbook, mostly by William Byrd but also one self-portrait by George Farnaby.

Douglas told us of the virginal and this music collection, how all keyboards of the era were called this in those times, about possible connections to the Virginal Queen (Queen Elizabeth) or to the virgula, a component in the mechanical action. I’ve been checking the tuning of the organs we’ve heard. Most have been ~A=444; St Pat’s was low, ~A=336. Interestingly, this was the one organ that was pretty close to A=440. It’s a matter of original construction (cheaper to build shorter pipes, was suggested) and tuning and expectations at the time, and Ken said it’s not feasible to retune whole organs. More organ lore..

Douglas Mews (organ) performed at Christ Church Anglican church in Daylesford. Ken Turner (organ repairman) of Goldfields Pipe Organs is performing multiple repairs during the festival. Cheers also to Nello Catarcia, the organist from Orvieto Cathedral, Italy, who dropped in and played a few bars.
Posted by Eric Pozza at 10:39 am