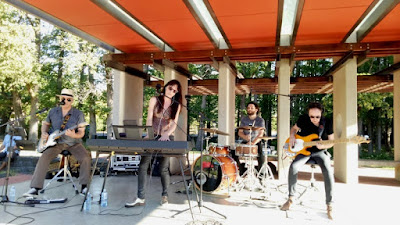 I once attended the Globe in London and I was amused to find the entertainment, singing and dancing, that accompanied the play. This was Lakespeare, a free public performance of Much ado about nothing, at the public stage in Glebe Park. First up was a popular band led by singer Sunny Amorena. This was interesting popular music, fairly simple rock grooves but the purposeful lyrics. Sadly I mostly missed the lyrics, but some titles were Waiting and Never giving up and one theme was as story that Sunny had experienced in LA, of speeding youths and police (I didn't catch the outcome, but I can guess) and her latest single, Boys like you. All sounding very relevant and personal and well felt. The playing was good. I particularly like some capable guitar solos from Don Miller-Robinson, once of the very successful pop-rock band Dragon. I was up close up for some of the time and was amused by the onstage sound, all drums and some voice and nothing else: they were all using in-ear monitors with no stage monitors or amps (for guitar, bass or drums). But a nice, if short, set from Sonny and mates. Sunny Amorena (vocals, keys) performed before Lakespeare with Don Miller-Robinson (guitar), Tony Mitchell (bass) and Rafael Salem (drums).
Posted by Eric Pozza at 11:14 am