Chris Botti has something for everyone. But passing comment caught my attention, about learning how to introduce songs. He'd watched some big names that he'd played with to learn how he now chats and mixes with the audience. There's nothing worse than "that was ..., now we'll play..." It's hard to avoid, but he did. He's obviously got some standard takes. Like the balcony joke that only Canberra understood... And the young drummer who's invited onstage. He did this at his 2011 Canberra concert (although this drummer was younger - 7 years old). How does he find them? And there's a string of feature performers that appear through the night doing all manner of styles. 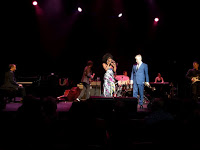 Here it was an acrobatic violinist (as last time), a female soul singer (as last time) and an operatic tenor. The tenor was new but the songs weren't: Time to say goodbye and Nessun dorma, no less. The pop hits of tenor arias. We duly clapped when we recognised the tunes. And a string of massively popular film tunes, Cinema Paradiso and Gabriel's oboe, and popular tunes, The look of love and Donny Hathaway and Roberta Flack, and some jazz, My funny valentine as an encore and Blue in green from Kind of Blue (at his 2011 Canberra concert, the Kind of Blue quote was Flamenco sketches). And he came down to the audience, this time playing only a few seats and one row from us. As did singer Sy Smith. Our seats were great: 4th row, centre. And in refreshingly non-corporate style, he invited pics and videos, jokingly requesting that we don't publish a video if he plays flat. Not that I thought he did. The musicians were impressive and very professional and part of the show: some up front, jokey, showy; some quiet but present; the guitarist just plain latin cool. I was surrounded by middle-aged who wouldn't attend jazz, but they were exposed to some piano chromatics and driving jazz rhythms and searing fusion guitar when the core band played. The piano trio was great and easily dissolved into some sinuous contemporary jazz behind Botti's melodious and often quick trumpet and this quartet was augmented with keys and guitar for more ordered but often searing blows. There's nothing like a searing guitar solo. The violin and various vocals added for their features. So, this was underlaid by jazz but sourcing input from a panoply of popular forms. And it worked. Everyone (yes, virtually everyone in the theatre) was up clapping on 2-4 at the end (we were warned against 1-3). All well presented, well played and well insinuated and downright entertaining. Not high art, perhaps, but worthy and capable and involving and great fun. And they are playing throughout the world on an almost daily basis and filling houses and all the while insinuating some impressive jazz musicianship. I'm on board. In fact, I stood up too.