Methodist in her madness 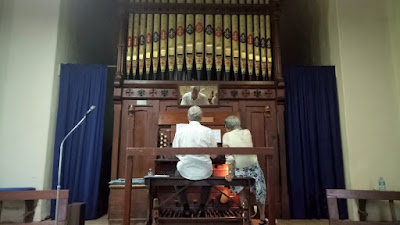 Thus did Martin Setchell introduced his personal history. He’d had young years in UK with a Methodist grandmother so attended churches like this one (Uniting Church, Daylesford). In chruch, he’d observed the pulpit in prime place, but the choir above and the organ above all. Thus he determined to play the organ. Most likely apocryphal, but amusing. This was Daylesford and it was a day of organs. First up was Martin playing Italian music on a mechanical action William Anderson organ, installed 1888. Two manuals, 3 couplers, tracker action, restored by George Fincham 1909 (to quote the language of the historical organ community). As with several other concerts, local organ repairer Ken was working till the last moment, and repairs held up the performance for ~15 minutes. Hot weather cracking joints, I think it was. Martin played Italians from 1550s and a few Germans who were influenced by the Italians and further developed the tradition (not least JS Bach). But the trills and varied notes were there, thanks to the tracker action.

Martin Setchell (organ) performed at the Uniting Church Daylesford.
Posted by Eric Pozza at 10:38 am