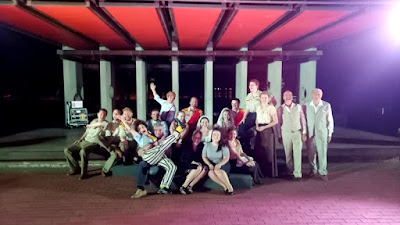 They called it Lakespeare and it was free Shakespeare in Glebe Park. Borrowed from NYC. Not quite the first Shakepeare in the open in Canberra but nice to see it return. This was Much ado about nothing, Shakespeare's comedy of a two couples leading to weddings, playful in intent if often ill influenced by intrigues. Red the plot. His comedies can be reasonably intricate with characters and out-of-time enough for us to chuckle at sexual and social mores (the women in front of us gave out a few belly laughs). But it works out in the end, the pairs of lovers pairing, the intriguers vanquished by the most unlikely of plods.

It's out of time with Shakespeare's language that's also dated, but I find it works when it's spoken (harder to read). I felt it was particularly well-staged for the circumstances, all performers mic-ed through a PA, so we heard the lot clearly, and entrances through the audience and even some action, where characters hide an overhear thing, huddled amongst the audience. There was slapstick and family parties and lively repartee and it worked. This was going on 2.5 hours but the audience of 1,000 stayed and laughed throughout. The lighting was limited and the scenery non-existent, but the intent and comedy and action were there and effective and the words easy to follow. So thin was a sinner. I can only look forward to more of it. Lakespeare presented Much ado about nothing in Glebe Park featuring Lexi Sekuless (Beatrice) and Duncan Driver (Benedick).
Posted by Eric Pozza at 5:52 pm

Email ThisBlogThis!Share to TwitterShare to FacebookShare to Pinterest
Labels: Duncan Driver, Lakespeare, Lexi Sekuless, Much ado about nothing, Shakespeare