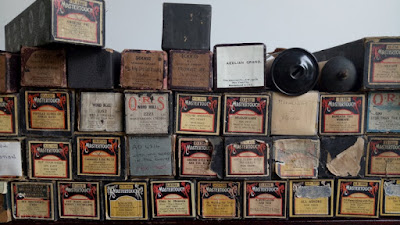 Apparently that’s the generic term for orchestrelles as player piano is for the pianola. We were invited to Damon O’Donoghue’s home to hear several Aeolian Orchestrelles. Damon restores these machines.

Apparently Mark Twain had one. The company was huge in its time, a US company producing player organs and pianos. These are instruments that play organ or piano mechanisms from a reel of performated paper while the performer chugs away at bellows and, for the organ switches stops. I arrived during the final movement of Beethoven 9th – the best thing I heard. But we had several others. The Canberra connection: Damon was the man of the Australia Fair Grand Concert Street Organ who used to play at Floriade. That was a sad loss.

Damon O’Donoghue demonstrated several Aeolian Orchestrelles at his workshop in Daylesford.
Posted by Eric Pozza at 10:42 am