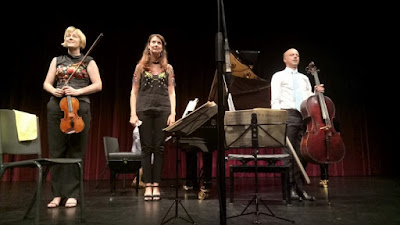 I could tell from the first notes of Anna Goldsworthy playing a few bars of solo Mozart piano that this was special. The softly spelt tone (admittedly on a generous Steinway), the internal flow of the phrasing and the exquisite dynamics said so. Within four bars or so the others came in, perhaps first violin then cello. Not sure. But it was clear these people play together and had done for some time. There were fleeting glimpses one to another, especially from piano and cello, and the movement of lines from one to another was exemplary as was the shared understanding of each phrase. The pleasure and clarity of it all showed also in their faces. Anna’s face would curl in little smiles or perhaps firmness although again only fleeting. Tim would play fewer notes, sometimes stern in his low-end role. Not so much Helen, who was vivid in head and body movement but less so in facial expressions. Helen introduced the first piece, Mozart Piano trio Gmaj K496 saying it was his second but it plays like a perfect example of the format, like a type specimen. Anna introduced the second piece, changed from the program’s Schumann to Mendelssohn Piano trio Dmin, more ambitious and more a partner for the Mozartian perfection. Again, dense, committed, communicated, a revelation. We were up close, first row, middle, watching the details. I was amused to notice I was hearing the strings in stereo. Tim’s cello was so firmly and clearly intoned, right to the lowest string and notes. I fret over a weak low string so this clicked with me. I was amused to see just a hint of Anna tapping beats with her left foot. And that piano tone again and Helen’s bowing and that fabulous cello tone and just the pleasure and expression of it all. Just immense and just a revelation.

I would have loved this, Eric. Have you read Anna Goldsworthy's memoir. It had great reviews but I
ve never managed to get to it. One day I might still.