A too quick interlude 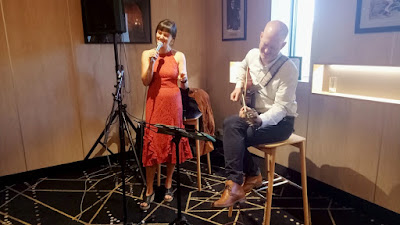 I saw so little and to some degree I heard so little of Briana Cowlishaw and that was disappointing.  I was booked for something else to 7pm so I only managed 4 tunes, and even though I was relatively close, the chatter was loud (that's good, but...).  I heard perhaps more of Greg as his guitar was sharp with attack and cut through, but voice is more smooth.  But what I heard was lovely and I could feel it getting earthier and firmer even by the fourth song.  I would have liked to follow that, as she settled in, but I couldn't.  Already there was a neat, well controlled alto voice, gentle but with occasional power, a nice awareness of timing so the melodies got subtle jazz inflections and delays and anticipations.  And she sang several scat improvs with lines that showed clear listening to sax lines and other jazz instruments.  This, too, was getting firmer and more adventurous and earthier. It helped that the last song I caught was the relatively raunchy Honeysuckle rose.  Her bossa was far more restrained and romantic and I liked to hear some language (Portuguese? Again I couldn't hear well) in the bossa.  So, nice but a short outing.  Greg was great too, of course.  His solo guitar role was totally convincing moving through accompaniment into soloing, chordal and single note lines, with no hesitation or feel of undue sparseness.  Not busy, but comfortable and present.  Too short but sweet.