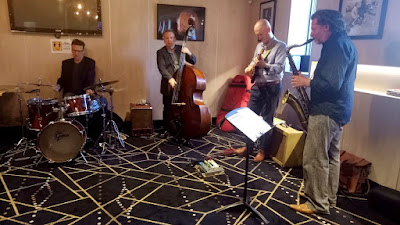 My God, what styles there are in jazz!  Styles over eras.  I got to the National Press Club for John Mackie's band, with Greg and Brendan and Mark.  Anyone who knows these names will know these are superlative players.  Just a thrill to hear such ease and richness.  So different from just days back, at Molly.  Was it Messaien that Bird studied and held in reverence?  And what of Hendrix who died young, shortly before he was to play with Miles.  Different worlds but all music, just mightily diverse, or as Newton said, "standing on the shoulders of giants".  Like Hildegard von Bingen to Fanny Mendelssohn.  Difference but also all one.  John played some Bird Parker and it was stunning.  The whole band: sharp, relevant, correct, devastatingly quick.  As a bassist, I was especially awed by Brendan's alacrity, but also the lines that were so melodically true.  Much the same from the others, of course.  All referencing the source, a standard or bop or whatever, but giving it personal relevance and currency in interpretation, so John's lines started by spelling some unexpected intervals then developed with harmony and flurries to floor the listener.  More modern, perhaps, but referential.  Then a bossa that sat like a rock, sturdy but pretty and devastatingly emotional.  Not sure what else to say, but I was enthralled.  Years of practice distilled into a few sets in a bar, National Press Club, for some birthday guests, I guess, and others.  And they noticed.  It's hard not to notice such ability, unpretentious, there, in a modest setting.  Really quite a stunner, actually.