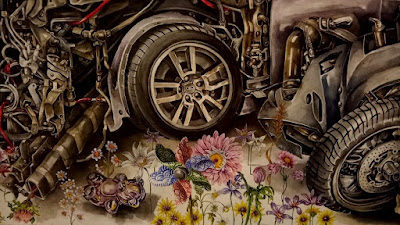 This was Part one of Know my name: Australian women artists 1900 to now at the National Gallery.  In the words of the NGA, "Know My Name celebrates the work of all women artists with an aim to enhance understanding of their contribution to Australia’s cultural life ... that addresses historical gender bias".  There's more with Part two later this year.  I got to a first view, then a quick revisit to catch some details and themes and especially a quote that impressed me.  It's in words, so more obvious than the visual art "use your culture in your own defence".  The full quote was "female culture is in the minds, hearts and secret dialogues of women. use your culture in your own defense. use soft aggression".  I was struck by the line about using your culture, meaning influence from a place of your own strength.  This was from Lip magazine (1976) from the Lip Collective, published in Victoria, initially with some government monies which were later denied due to its perceived suggestiveness.  See the original on display and you'll understand.  It's clever, amusingly described as "a delightful play on the pornographic centrefold (art historian Louise Mayhew).  There were many works that dealt with feminist issues, but not only.  One room stunned with three huge feminist works that I'd seen before whole or in part: Tracey Moffat, Anne Ferran, Julie Rrap.  Our own eX de Medici had a fabulous piece called The Wreckers, on civilisational destruction and perhaps hinting at a natural recovery.  In another room I was intrigued by Jenny Watson Self portrait as narcotic and somewhat perplexed by one commentary by Marie Hagerty, fascinated by just how Marie Hagerty managed her Flight research photos.  Once again I enjoyed pics by Carol Jerrems.  I noticed some challenging music accompanying a video and it was by Roger Frampton.  I liked the early works with their traditional skills: portraits, self-portraits, nudes, too.  I do enjoy those skills.  As for up-to-date, there was a museum-like presentation by Janet Laurence called Requiem made in the wake of the 2019/2020 bushfires and hail storms.  She notes in her piece that "Australia is on the WWF's list of global deforestation hotspots - the only one in the developed world".  I dare say it's because we just got to the destruction later than others, but that's no excuse.  There were numerous other names of interest, some known, many less so and various other themes and artists: Indigenous, posters, dissenters.  I liked the bedraggled, disintegrating Aussie flag commenting on Howard's core and non-core promises.  And Barbara Campbell's Dubious letters (likely fake) used to implicate Mary Queen of Scots in the death of her husband in the form of a skirt.  I chatted with some knowledgeable women who said it had originally been worn by the artist.  And there was feminist fashion and associated exhibitions on Patricia Piccinini and Tjanpi desert weavers and the Body electric ("includes works with adult content").  Some great stuff there.  Well worth a visit or several.

Part 1 of the exhibition Know my name: Australian women artists 1900+ runs at the National Gallery to mid-2021.  Part 2 follows in July.