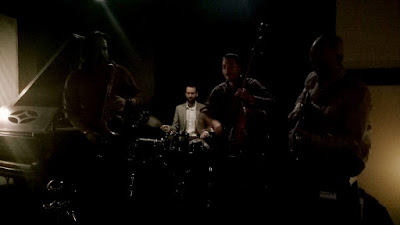 Obviously Con Campbell does.  At least that's how I hear him and it was no different last night.  It's a quiet week but I wandered into Molly and there was Con's band, with Greg and Brendan and Mark.  Playing bebop.  It mostly stayed that way for the night, or if not bop, treated that way.  Not that Brendan would slow it down.  He's a machine gunner with delightful melodicism so raring and ready for the quick stuff and he plays with the application and effort that the big bass needs and sounds great for it.  Greg is more restrained: blindingly quick but clean, not the bluesy dirt that the others were indulging in.  I tapped one time on my metronome: 274.  Quick but not into the stratosphere.  Brendan had worried that he'd maybe settled the time, but I doubt it.  There was reliable drive here and his double timed phrases didn't lag a millisecond.  Con led with the tunes and heads and walked through the fours and the rest.  Lovely, expressive solos and a big earthy tone.  The alto player I was sitting with commented on that.  Mark was bright in the lights and delightfully steady and unintrusive but took the feature when the fours came around and they were inventive and easy.  Such a lovely outing, if "outing" is the right word for the bebop and uptempo swingers and latins that we were hearing.  Maybe stunner is a better word.  I got into chatter with Brendan's family (cheers, Mel) and that was interesting, if necessarily shouty given the volume, so I missed a good bit of the music.  But every peek at the band was another stunning line from someone.  This was still the quiet week after Christmas, not yet New Year's Eve, but this was alive.  Great stuff.