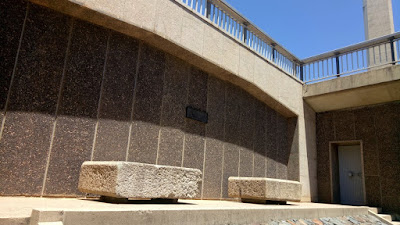 As the national capital, Canberra has various oddities or special things, often gifts of other nations, or in a major collecting institution.  It's not quite Rome with its own immense history or Berlin or Paris that display a mix of local and others', or London that's full of imports.  Or Washington DC with plenty of purchases from the old countries given its immense personal wealth over the last century or two.  That said, I prefer our Blue Poles over a similarly large Jackson Pollock in MOMA without the poles.  Just shows.  But then their waterlillies was immensely larger and their Picassos were very significant and at least one Modigliani was a key work.  Do we have a Modigliani?  We probably have a print or two.  But I could go on like this.  Those great collections are a major pleasure of my travels.  But today I went off in search of one local oddity.  I'd heard of our two bricks from London's Waterloo Bridge: built 1817; dismantled for a new bridge 1942.  The stones were distributed through the Commonwealth.  ours are two large granite stones (~1mx1mx2m) between the two arches of the Commonwealth Ave Bridge at the Parliament House end.  I walked on to the National Library, an old haunt.  Firstly, to see our Henry Moore sculpture (Two piece reclining figure, no.9), but primarily to see again our brick from the ancient Library of Athens, a gift from the Greek government: "a piece  of white marble from an Athenian library that was razed by invaders about AD 267 This stone, along with the rest of the ruins of the Library of Pantainos, was largely hidden from sight from AD 267 until 1933, when it was uncovered in an archaeological dig by the American School of Classical Studies in Athens. It made its journey across the world to Australia in 1968 when the stone was donated by the Greek Government to the Australian Government for the new National Library building".  It's located in the foyer of the National Library.  Then walking on to Albert Hall, I see a sundial set on several bricks from the Houses of Parliament, Westminster, no less.  Do these wonders never cease? 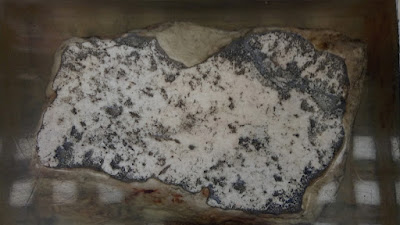 Email ThisBlogThis!Share to TwitterShare to FacebookShare to Pinterest
Labels: Canberra