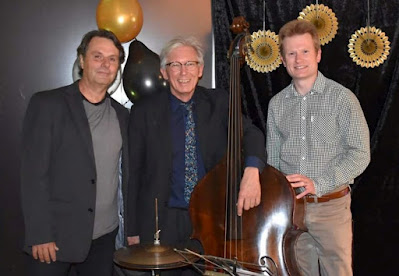 Excuse the indulgence, but this is such a pretty picture of my bass that I had to include it here.  It's Tilt at the launch party for the British Film Festival at Palace Electric.   We had a great night there and it led to a gig for the British High Commissioner at her residence, called Westminster House, no less!  Westminster House is on a huge block on the crest of a hill in Deakin next to Grammar Girls.  I'd gone reminding myself not to mention Brexit.  We were playing at the edge of a wall-less marquis, the wind was coming in over the tops of local housing, but we managed to play a decent gig with fingerless gloves.  The chatter was going well and we were enjoying things.  There were speeches and Brexit was mentioned(!)  Then, in the last minutes, the rain came in.  We stopped and the guests moved inside.  Our host uttered an obvious comment but in context it amused me no end: "British weather".  Nice way to finish a very difficult and very interrupted gigging year.  Merry Christmas from Tilt and Canberra Jazz.