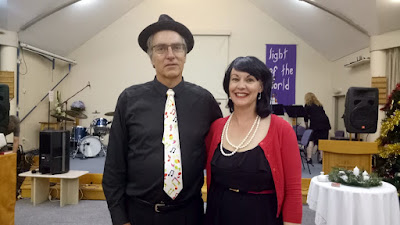 Mike and Rachel are mates who I played with in bands in the past, so it was both a duty and a pleasure to attend their third album launch.  It was a smallish event, Covid-limited, I guess, in a church but not at all small in application to performance.  This was 13 players - Mike, Rachel and rhythm and horn sections and strings, all being recorded for later ArtSound broadcast by Chris Deacon.  And that musical aggregation had plenty of friends in it, too: Richard and Miro and Steve and Phil and Con and I got chummy with Ilsa.  A gaggle of lovely, capable players performing Mike's joyous, purposeful, often witty music.  Mike's styles are not so much of today, but Michael Bublé made it big, so why not this clever music?  There were love songs, songbook-styled AABA standards, sambas and bossas and some funkier tunes.  Rachel's singing is always a huge pleasure and Mike and Rach harmonise as a lovely pair.  There's considerable piety, too, amongst the passions.  There's a market for that, but it's not for the market that it's felt, perhaps unlike some adherents.  One thing that I hadn't been aware of was Mike's writing of a musical, apparently themed around a scientist who discovers purpose beyond rationality when he meets a singer on a cruise liner.  It was a revelation as I listened and realised the inherent style of musical theatre and the different musical outcome.  It was lovely.   This is a music I recognise: turnarounds, grooves, melodies.  Same too with the solos, and there were some beauties there from some significant local players, although not given the chance to let go as in bop or jams.  And that cute old '20s two-feel.  All there, amazingly diverse if not particularly like the rap that's on the radio.  And done so well.  I was happy as Larry to buy my copy and get Mike's and Rach's signatures.  There's joy and love here, and they are both open to it.  We need a world more like this!