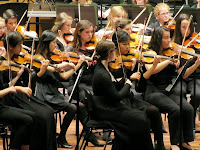 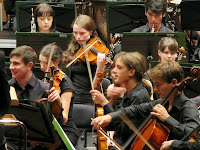 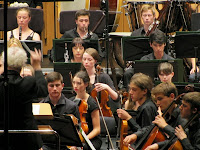 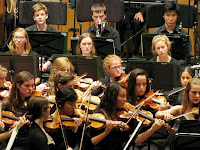 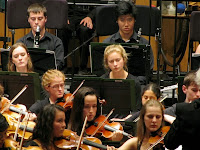 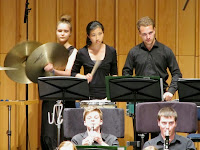 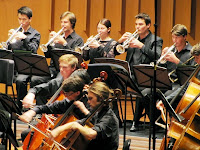 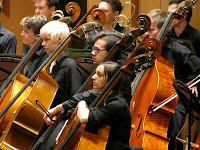 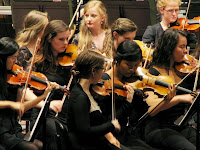 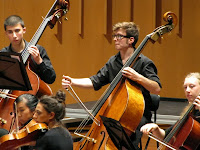 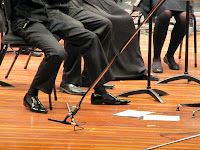 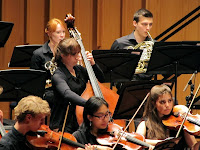 Later that evening, after a picnic dinner. The AYO reconvenes for orchestral concert no.2 for the day and for the week. Same three orchestras. This time the Bishop Orchestra under Alexandre Bloch goes first, performing Tchaikovsky Romeo and Juliet Fantasy-overture. I'd read in preparation for this and the others, so I was waiting for the characters and scenes of Shakespeare's love tragedy. The love scenes of Romeo and Juliet and the fights of Capulets and Montagues were obvious; the death scenes with the heart-beating tuba was a stunner; I missed Friar Lawrence. How accurate is this as a portrayal of young love, and enveloping passion, pure and melodious! Are we too cynical in our times to accept this, or too grown-up? Musing further, do we confuse cynicism with maturity? The orchestra performed with panache, although I felt dynamics were a bit tight a few times. Here's where professionalism and confidence and constant performance make all the difference. Even more impressive after hearing that 80% of the Music camp participants are new this year. I expect there's a turnover revolving around the triennial international tours. Second was the Hopkins Chamber Orchestra under Geoffrey Lancaster playing Haydn Symphony no.104 in D, the London Symphony. This was the last of 12 symphonies he wrote in London, but the one with the "London" nomenclature, and the work of a mature composer. Majestic and stately but very cerebral after the romanticism of Tchaikovsky. Sadly, a mic stand collapsed in the last movement, first onto the conductor and then to the floor, which must have come over live ABC-FM as a knock and subsequent unbalanced orchestra. Too bad for the performers who will lose a good memory. Then to Copland Third Symphony by the Alexander Orchestra under Richard Gill. It's got the memorable Fanfare for the Common Man. A wit said it had the fanfare in 5 keys. Certainly, the later movement is permutations on this theme, but it's an impressive theme. The earlier part, though, seemed aimless to me and Megan and Grissoula and Geoff. I thought of the movies and the choppiness of their scenes and camera angles. This is a work devised in the era of movies. Has frame and scene flipping changed our musical conceptualisation and even our intelligence and awareness? Maybe it was just the end of a lengthy session and we were a bit wrung out and concentrating less. Two wonderful concerts in one day and several more coming over the week with another two orchestral outings this coming Saturday. Great. And you can't get better value. Truly excellent entertainment: committed, intelligent, attractive and youthfully vibrant. Fabulous. Hanging out for the rest.
Posted by Eric Pozza at 4:32 pm