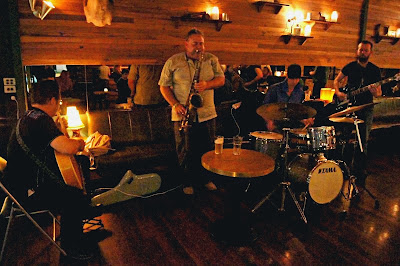 January is quiet but I got off to Hippo and it was old friends in so many ways The band was billed as the John Clark quartet but the lineup was slightly changed. This was standard As Famous as the Moon, Dirk's expandable band with Graeme and Lachlan and John on drums. These guys have been around since I remember and passed 3,000 gigs some time ago, so old friends. They played old friends, too, the standards songbook, including Miss Jones, A Train, Little suede shoes, the blues, all done smooth and stylish and unobtrusively with solid swing and plenty of soloing. I luxuriated in Dirk's gentle but authoritative and well structured solos and intimate tone. Graeme's comping was a pleasure and his solos laid back and extensive. Lachlan's bass was picked but deep-thumpy so must be flatwounds; supportive and ever present and flexible and fast in solos. I hadn't heard John in this context, but he seemed hotter than the others, sitting easily in support but ready to insert a snare snap or fill or let go with sharp and impulsive solos. And Hippo itself is an old friend. It's been a jazz club on and off ever since I arrived in Canberra in the mid-80s. It's dark now with Arctic decorations - snow shoes and mooseheads. Strange, but still one of several old friends.