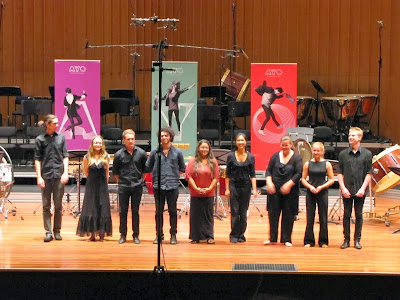 The violins may be the fastest and the double basses the hardest working, but Andrew Howes joked that the percussionists have the most fun. I could imagine this is true. Percussion always seems so corporeal and uncerebral, something you just indulge in. But with all these dotted charts and pitched keyboard-equipped instruments - the glocks and marimbas and vibes and even tubular bells - I'm not sure that's true. This must be hard, intellectual work, but none-the-less they bash and hit and that must be indulgent in some way. And from the gig tonight, of the Australian Youth Orchestra's Percussion ensemble, I can only maintain this expectation. 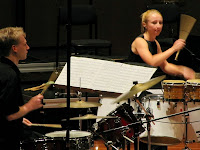 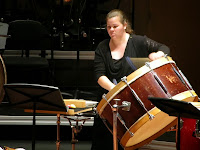 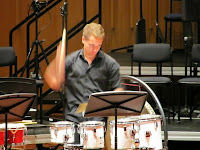 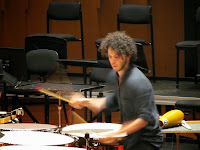 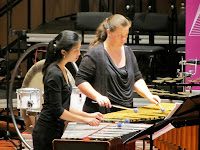 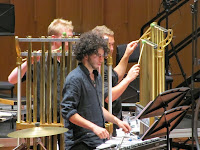 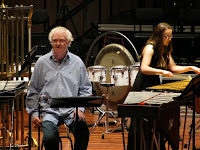 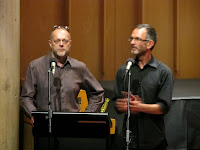 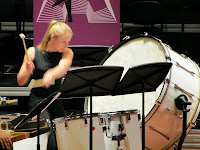 The concert started with a bit of audience participation led by one of the tutors. We were shown various clapping routines, slapping hands and chests and thighs, in three and four and five. The audience was split into sections so their parts moved in and out of time, and the musicians did various claps and drum patterns against this. The patterns were taken from an old standard book that I have on my shelves, Ted Reed's Progressive steps to syncopation for the modern drummer. All fun and involving. Then furniture moves. There were lots of these and we were regaled by tutors while we waited. The second tune was Rouse's Ogoun Badagris. I heard it as jungle-earthy with mostly untuned drums in a moderate speed four. There was some of the earthy primitive about the first two tunes, which is what you expect of percussion. Third was Frank Zappa's Idiot Bastard Son. How different is this? Richard Gill came on to voice (sing?) acerbic Zappa lyrics over four keyboarded instruments. This was more pop, more harmonic, more grooved, and endlessly cynical. Then Nishimura's Padma in meditation. It was introduced as soft, warm, velvety. I heard it as airy and spacey with swells and drones and occasional melody and unchanging harmony. Lots of rolling sticks and mallets, lots of varied tones, marimbas, glockenspiels, bells, cymbals, gong, played with mallets and sticks and bows. Quite lovely and mesmerising. Last was Rouse's Bonham, dedicated to Led Zeppelin's drummer John Bonham. This starts with the simple 2-bar drum phrase from When the levee breaks. The groove is held on drum kit throughout, although not as incessantly as on the original, and enriched with a batch of 7 drums playing variations on the groove. I wondered if the written lines were influenced by a Bonham solo. So, this was a varied and entertaining program. The hour went suddenly and it was ended. Much enjoyed. It certainly looks like the percussionists have all the fun.