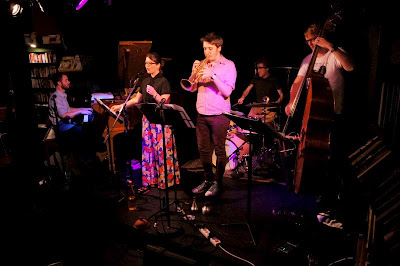 Casey mentioned that the band all had Canberra connections other than Johan. I wondered if being married to Casey was a Canberra connection (obviously it is!) but you can see Casey's point. Other than Johan, the band was locally trained. But they've toured in Europe and released a CD recorded live in Krakow and they are touring here and are about to go into the studio. I am impressed that such international collaborations happen, but they do and they are common enough.

This one is Australia/Sweden with the Moirs in Gothenburg. Some tone of Scandinavia comes through in Casey's voice. And what voice! Her control, invention, flexibility are breathtaking. There's immense movement, quietness and detail here, and all manner of vocal techniques are in use, breaths, tongue clicks, pops, shushs. Mostly wordlessly, soloistically, perhaps unison as melody with Reuben's trumpet, or bouncing off Aidan's drums. But this incarnation is structured around songs with words, all poetry written by Casey herself and put to music by Casey or Reuben or Luke or Johan. Words, of course, have shared meaning, so there were love songs and tragic songs and fun songs and more. But in her way, Casey melds and bends consonants and tones for musical effect, shushing a final s or tacking a final t, consistently in any one tune. These shaped words may be harder to catch, and the lines are rhythmically jagged, but there's seriousness in thought, here, not just in music. And what a responsive band this is. Casey gave some guidance, conducting some starts and stops, but these are independently capable musicians, each getting spots to highlight their parts. I mentioned the vocals/drums segment - a unique or very rare combination - and the unison trumpet/vocals, which was satisfying if not so rare. There was also a bass/vocals passage and frequent open spaces for individual instruments - piano, of course, but also bass and mixes of bass/trumpet and the like. Luke even donned a piano accordion for the final, jokey tune, and that fit neatly with the theme, musically folksy and ironic but with serious intent. The song was entitled No : "No there is nothing new in knowing nothing / like those who know nothing new". I can only agree. There are open, free feels here, bass noises and harmonics, free jazz and new techniques. There's tradition, too, as I caught hints of quotes from the repertoire, from experience rather than intent. Grooves to settle or dissolve; solo passages that are interrupted by frenzied fills; crescendoes that grow long and almost imperceptibly; then to fall or decay, ff to pp and perhaps breeze and quizzical, sparse piano chords. There was even an end with the guys chanting under Casey's much firmer voice. It's complex music, intriguing and rich with lots of openess and clean air. Canberra and Gothenburg can both probably lay claim to open space and clean air.

There's detail and complexity here and it places considerable demands on both performers and audience, but the room was entranced. Like travel, music like this broadens a stale mind. Obviously one for the arthouse and festivals, never the clubs. Svelia is the international collaboration of Casey Moir (vocals), Johan Moir (bass), Reuben Lewis (trumpet), Luke Sweeting (piano, piano accordion) and Aidan Lowe (drums).
Posted by Eric Pozza at 4:46 pm