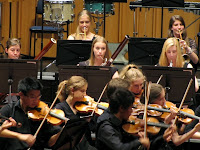 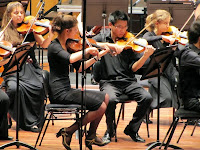 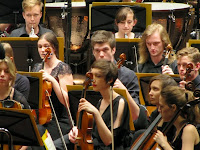 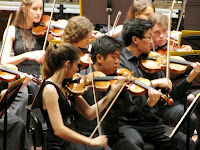 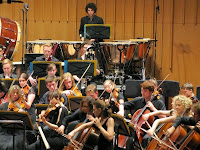 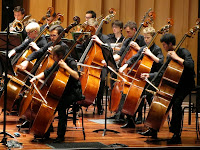 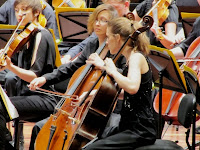 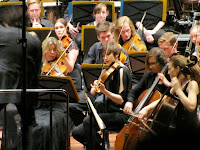 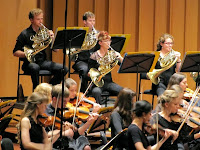 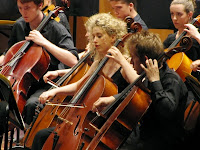 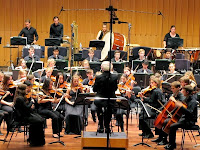 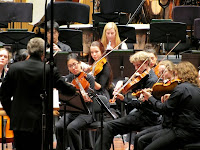 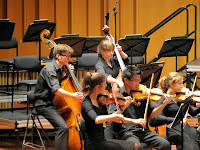 It's January and the Australian Youth Orchestra are back in town for their National Music Camp. It's a biennial event here in Canberra, and I hope it remains that way. It's a two week event with a series of free concerts in week 2. It's a young group, aged from teens into the mid-twenties, well trained and keen. There's real excitement at these concerts and real skills. You can hear a few rough edges, from lack of experience or nerves, but to be expected. Yesterday was concert day 1 with two orchestral concerts each presented by three orchestras.

The Hopkins Chamber Orchestra conducted by Geoffrey Lancaster opened with Mozart Symphony no. 29 in A. Mozart is obvious a mile off. This was written after 28 other symphonies while he was a still a teenager. It's light and breezy music with inevitable melody. The performance was stronger on some more forceful passages and a bit nervous at the start, but these guys had the unenviable role of going first. Next was a world premiere. The Alexander Orchestra under Richard Gill performed a nine-minute commissioned work that had its first outing at the NMC, Andrew Howes' Ichiros. This interested me. Andrew explained the work is written around the length of an instrument to perform a fifth, the ratio of Pi and Pythagoras' golden mean. So the work builds as crescendo and cacophony at a point around 2/3 of the way to the end and uses mallet hitting train track cut to the mean. I heard a filmic mash of swells and bells, mysterious and fluid. Tones passed between instruments and occasionally one played a melody. A trumpet featured later, playing tonally but intervallic not scalar. Eventually, it returns to the start, a rubato-like agglomeration of sliding strings and unison trombones and an ecstasy at the end. Most interesting. And also interesting, Andrew advised he'd spent 450 hours composing this 9 minutes of music. Third was the Bishop Orchestra under Alexandre Bloch (Assistant Conductor, London Symphony Orchestra) performing Brahms Symphony no. 4 in E minor. Brahms was called labelled one of the three great B's (with Bach and Beethoven) but the program notes mention that Tchaikovsky called him a "giftless bastard". There were times I felt the music sagged, struggling for purpose or direction. I liked the flowing, legato first movement; the third is irrepressible and popular; the fourth had some amazingly long string lines, including for bass. The performance of all was impressive, tight with decent intonation, better on some louder passages. I would have liked more dynamics sometimes and other times more projection, but this is a first concert by a young group only getting in its stride. Hugely impressive.
Posted by Eric Pozza at 4:31 pm