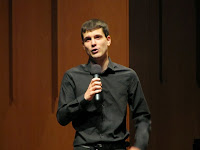 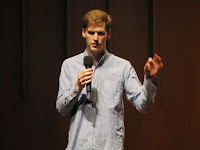 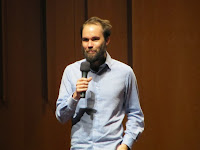 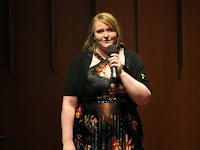 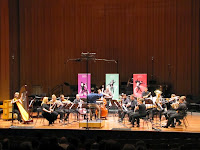 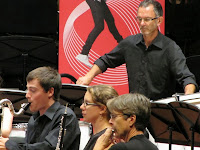 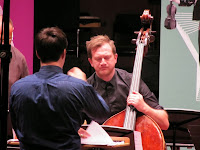 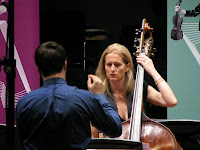 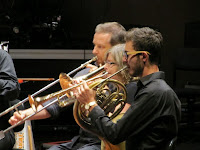 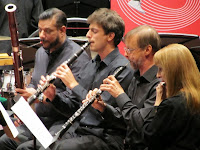 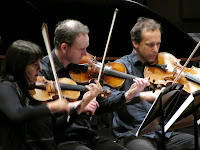 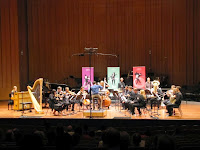 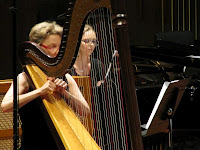 This was a short one, the AYO Composers Concert performance. AYO includes a range of music roles - management, staging, writing, composition, as well as performance. The composition performance featured four young composers and their work is performed by the older tutors, so this is quite a different beast. The first work was Henry Sdraulig's Beyond viridescence : four scenes for chamber orchestra. This was the only piece with separate movements although I'm not sure I noticed four. Starting with bass drums and oboe melody, this is tonal, impressionistic, spare, mystical with crescendos and snare and tuba climax. About 10 minutes. Second was Lachlan Hughes' Diaphony. The title suggests the sounds: contemporary, violin squeaks and short tones spattered against woodwind colours and crescendos. Introduced by the composer as textures and variations in density. The conductor was marking time in 3 but not obvious to my ear. I was interested in the title of the third piece, Samuel Smith's "his calm is made of resignation" for I feel that at the moment for the state of the world and Australia, but this was more inner-facing than so obviously socio-political. Introduced as responding to a book that was "anxious almost delirious", of opposing sound worlds in conflict. The conductor was marking 4 but again I struggled for a beat amongst slides and crescendoes and palettes of sound. Fourth was CJ's mate, Sally Greenaway and I found this a relief after soundscapes and colours. Sally introduced the work as from a poem, featuring Elk antlers. Well, I'll be! Not in my experience, but the music was. She'd sought four notes that supported an interesting dissonance and found D7 (b9 #5). It started pensive with ineluctably rich harmonies, an obvious feeling of time, some lovely development that your could build a story on. This was cinematic, broadminded and with a view to the world, more traditional but not untesting, rich with harmonies and querying with development. Nice one, Sally. I found this concert was a raft of three impressionistic, personal, inner-facing compositions with one outgoing one. Four wonderful works, all worthy and interesting. Sally's was obviously my favourite, but that's me, on the day. Congrats to all. And thanks to the two chamber orchestras of professionals who performed the works under Nicholas Vines (conductor).
Posted by Eric Pozza at 2:02 pm