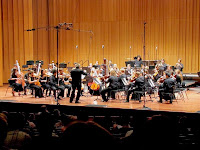 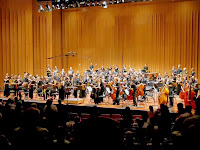 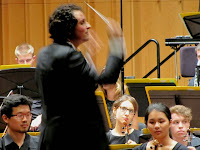 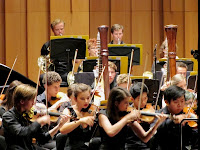 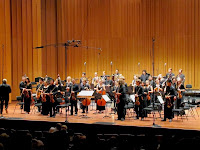 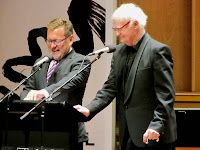 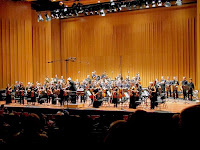 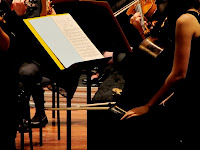 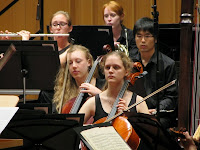 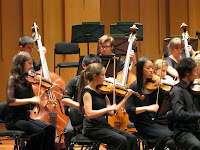 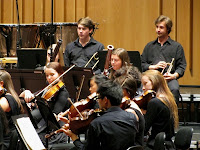 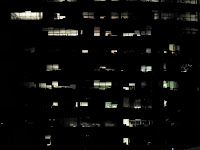 The final concert of the AYO National Music Camp for 2014. We can hope for 2016, providing the ANU comes good with its support. I hope they do. The quality of music continues. The Hopkins Chamber Orchestra under Geoffrey Lancaster opens again, this time with Beethoven Creatures of Prometheus excerpts. This is Beethoven so the changes are inevitable and clear but it's also a ballet, so this serves a different master and also serves a classical mythical theme of civilisation replacing ignorance. They played four movements, different in style, strings buzzing with rapid movement at mf volume, flutes and oboes and harp and a solo cello cadenza. Then the Alexander Orchestra under Richard Gill performed Rachmaninov Symphony no.2 in D minor. Apparently it's his first symphony, and Rachmaninov never granted it a number, just left it with the moniker Youth. A nice romantic work with a big end. After interval was the final work, Alexandre Bloch leading the Bishop Orchestra in Stravinsky's Petruschka. It's another ballet work. I'd expected demonstrative and it started that was, but passed through so many sections and emotions. By the end I felt I'd attended a theatrical work, telling a story through scenes and actions and repetitions. It's a murdered puppet's love story for a ballerina (mmm). Perhaps more a product of the era, but I heard Gershwin and West Side Story and some intriguing piano harmonics. The program notes talk of this and the Firebird featuring "two unrelated major chords, played simultaneously and separated by the interval of a tritone". For the jazzers, this is tritone substitution. The program notes also say it's "hitherto unknown before in Western music" and called the "Petrushka chord". Apparently another segment has two trumpets playing melody, one in C major, the other in B flat. Tritone substitution and sidestepping (although that's usually by a semitone). Jazz improv, anyone? Then a truly deserved standing ovation and the cutest of encores. Alexandre Bloch is also a cellist and composer. He put together a classical-themes-best-of medley called "On board the music camp" for this encore. About 6 or 8 renowned themes jointed together quite neatly. Megan recognised Brahms and Tchaikovsky. Then the melancholy joy of the end, at least for the participants. Congrats to AYO again. Magnificent and an eye-opener for what a week in time can do.

Eric wrote: "two unrelated major chords, played simultaneously and separated by the interval of a tritone. For the jazzers, this is tritone substitution".

The former is a stand-alone poly-chord purposely clouding the tonality. In contrast, a TT substitution still implies a tonal centre (a flatted secondary dominant 7th resolving a semitone to the tonic). Moreover TT sub is never played simultaneously with the tonic chord (M7, M6 M9 M6/9 etc) in a jazz context.