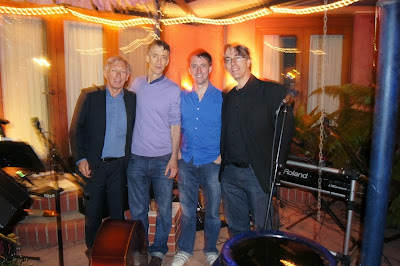 CJ seems to be having an unplanned breather, but here are a few pics from a New Years Eve party we played at last night. For Richard and family, playing with Mike, Richard and Steve Richards.

Richard relative Kahlee has singer-song-written pop and folk in Melbourne and sat in for a few tunes. I was satisfied with sound and technique so enjoying the outing. Sound helps with everything, but the openness of playing outside at moderate volume made for a groove-conscious, underplayed gig. I revelled in the polyrhythmic interplays of Herbie Hancock and sweetness and embellishments and simple counterpoint of the latins and the neatness of rock and roll pentatonics and the offbeat syncopation of finger-funk. All fun. And the party was good, too... This night, Jazz Republic was Richard Manderson (saxes), Mike Dooley (piano), Eric Pozza (bass) and Steve Richards (drums) and Kahlee Baker (vocals) sat in for one set.
Posted by Eric Pozza at 4:19 pm