Ending a busy year for TAI 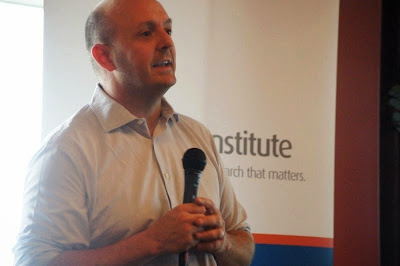 Richard Denniss speaks easily and casually and I expect no less, but I was still taken aback by his best line of the night: "Telling the truth is a lot cheaper". He meant this relative to PR campaigns. It was in the context of the Australia Institute's successes over the last year and its approach, which I'd describe as turning on the light by spreading facts that respond to spin and misinformation. Like the small number of people who actually work in mining or Tassie forestry against the impressions of large workforces created by industry and government. Or the details of government reports, like Warburton's review of the RET that showed that reducing renewable power would actually increase electricity prices within few years and result in a large movement of wealth from consumers to owners of coal fired power stations.

We were at the last Politics in the Pub for the year. It's a wrap-up session and a thanks to the supporters and a chance to meet and chat. He spoke of successes for the year, of TAI's approach, of the possibilities for promoting "progressive ideas" (I hate that term, but don't have another), of the importance of the facts, of hard work by few staff, of their funding (not much!). He spoke of developing a constituency for reform for better governance, policies and longer term thinking. Richard mentioned a merge with Catalyst in Sydney, and attempts to spread events and influence outside Canberra. Also of their approach to politicians, how they inform and persuade. He mentioned their effectiveness on the Shepherd Commission of Audit, Budget measures, the Warburton Review of RET, more. He introduced a meagre list of researchers (how busy must these people be? Look at their website for their activities and publications). He said support could come in dollars, emotional support or by sharing, then expanded on the sharing of ideas to promote that "constituency for reform". He recognised how much could be done or where the research is so-far lacking. To one question, he responded: "Good question ... I don't have a good answer". He raised a new issue, of intra-generational equity to replace arguments of inter-generational equity. (I like this one; let's avoid inter-generational culture wars). But this was a relaxed and informal session. At one stage, Richard commented "Happy to take a few questions or happier to have a beer" so it was apt that I saw a string of beers being offered at the end of the night. It was a nice gesture and too bad he couldn't drink them all. Like many, he was driving.

Richard Denniss spoke at the final Politics in the Pub of 2014 for the Australia Institute.
Posted by Eric Pozza at 2:10 pm