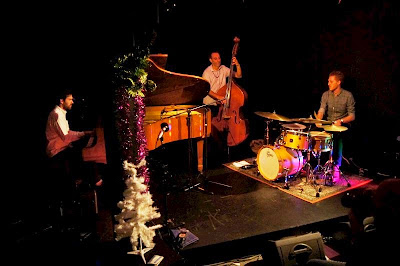 I thought I was hearing substitutions over chromatics in Andy Butler's playing and I chatted with him later about playing, listening and the like. He doesn't listen to tons of music; the most recent was Frank Sinatra. Most of his recent gigs have been more experimental. He mostly plays and practices classical. He mentioned Scriabin Preludes as transferable to jazz. May I was hearing Scriabin. Certainly, there was little of the right hand lines against left hand chording that is standard bop and later jazz soloing style. This was chordal, full handed style. Classical is like that.

I heard block chords, a mobility with time and placement of beats, feels well behind the beat, chromaticism and chromatic movements, heavy pedalling (unusually using several pedals), some almost endless solo lines, considerable freedom in harmony. He was playing standards but bending them wildly, at least when he wasn't just spelling a beautiful balladic melody. This is all something I love: great music treated with frequent, trained abandon. Andy was playing with Simon Milman and Aidan Lowe. Simon took plenty of solos, sometimes searching for, or with the help of, the melody; not so fast but exploratory. Nice. Aidan was frequent smiles, finding ways to respond to some daring takes, quick witted, driving, sensitive and aware. Great drumming, as usual. Just standards. Set 1: How deep is the ocean, Groovin' high, I fall in love too easily (a lovely tune and not common), Slow boat to China (how cute, but perfectly effective and innocently swinging), Foggy day (at a quick pace). Then set 2: If I were a bell, I thought about you, Darn that dream, Oleo, Straight no chaser. Great to see Andy again; great to hear a string of standards played with a considerable learned transgression; great to hear a decent piano trio. If only Andy had brought his own Steinway.

It was fine music-making, with lovely whimsical interactions between the three of them.