A world away in Civic 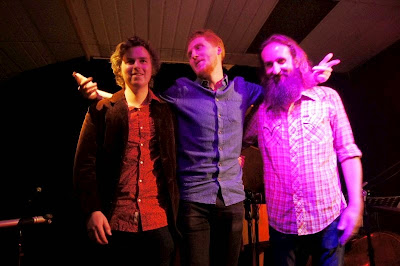 Tate Sheridan was just a few hours later and a few km away, at Smiths, but this was another world. Tate was launching his CD. Again, this was a piano trio, Tate with James Luke and Aidan Lowe, but there were no standards here. The music was much more moody, more punctuated and arranged, more melodic or minimalist, rather than changes through chords. There were still solos passed between players although less obviously than in standards territory.

There were passages of solo piano that led to some complex compositions. There were more ostinatos, more edgy arrangements and stops and starts, but they were playing arrangements that were prepared for a CD. There were stories and references. Final hour was a story of a 240km, month-long Mounties chase culminating in a shootout and the death of the Mad Trapper of Rat River in Northern Canada in 1932. House arrest was a punctuated medium-fast swing. Lone gunman was a ballad, mostly piano solo, but joined later by bass and drums and a wordless vocal overlay from Tate. Baile is Spanish for "to dance" and was a lively number with unison features and later solos over a quick latin groove. Grace was another ballad developing into a repeating rising phrase that Tate said sums up his time in Canberra. Please no questions is another lively swing and Run don't walk is a dedication to Gonzalo Rubalcaba. Tate's piano is developed and skilled and classically formed. James' bass is quick and clear, commonly into thumb positions and melodically phrased. Aidan sits discretely as part of the music, setting grooves with subtlety and always flexible in tone and sharp in accent. This was not a light outing, the music demanded involvement and concentration, but it was a work of seriousness played with requisite skills. Great night. Looking forward to hearing most of this in its recorded form.