Acclamations of the season 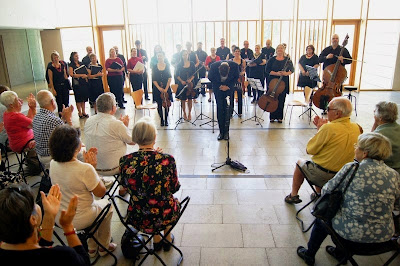 From the first notes I was enamoured. This was Igitur nos with a small chamber orchestra (2xvln,vla,cl,bs), directed by Matthew Stuckings, playing a Christmas concert in the foyer of the National Portrait Gallery. Lots of light, lots of glass, lots of luscious choral reverb. In this space, I couldn't always pick up Matthew's comments, but the voices swelled beautifully. The first two songs were carols - Ding dong merrily on high and This is the truth sent from above (more obscure) - sung without accompaniment. I noticed sweet harmonies and accurate phrasing and shared enunciations: those final consonants crisply together, the dynamics common to all. This is a very nice choir. Then the chorus, And the glory of the Lord, from Handel's Messiah, all dignified and joyous. Magnificent. This was to repeat as the unplanned encore at the end. Then a English Protestant carol, by Orlando Gibbons regarding John the Baptist, all sparse and upright and clearly enunciated and featuring a solo alto by Rebecca Alexander. Then a few singalongs - Once in Royal David's city and Hark the Herald angel sings. I could see some moving lips but was hearing the choir. Then a very English song, Mine liking, all folky and rural and unadorned, and an English arrangement of the German In dulce iubilo, faithful and straightforward. Matthew introduced the next, by John Rutter, as his conversion to Rutter's compositions. The piece was What sweeter music and I'm sure the orchestra didn't blink at 6 flats. Then Healey Willen on the Epiphany and two more singalongs: O little town of Bethlehem and O come all ye faithful. By then, the audience was more confident, and I, for one, enjoyed the opportunity to join in (reasonably discretely!).

This was joyous and involving with its carol singalongs, but also remarkably beautiful with the lovely voices blending and expressing as one, and with a receptive string quintet of considerable presence. The space was worked well for the ensemble, even if it also highlighted occasional children's shrieks. So, a worthy acclamation for the Christmas period and a delight for the ears.

Igitur nos and its accompanying string quintet were directed by Matthew Stuckings. They perfomed a concert of Christmas carols in the foyer of the National Portrait Gallery. Rebecca Alexander (alto) soloed for the Gibbons.
Posted by Eric Pozza at 3:20 pm