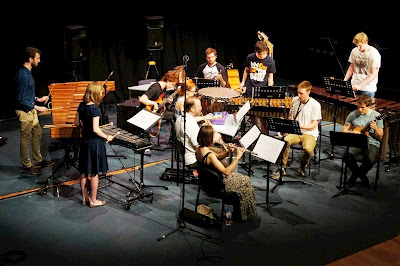 It's pouring concerts, and later in the day, it rained. Terry Riley's In C was 50 years old on 22 Dec 2014 and to celebrate a string of music groups streamed performances on the Net under the moniker A Worldwide day of In C. An invitation to the local performance, led by Charles Martin in the ANU Band Room, dropped in my intray a few hours before I was to go shopping in Civic (not last minute yet; I still have 2 days). So, unexpectedly I was at another concert. The audience was tiny, at least the physical audience; I expect there were (many) others on the Net. I had a copy of music. It comprises 53 snippets of melody in C major, of differing durations and some instructions. All instruments play all snippets in order, breaks allowed, repetition is up to the individual, musos must listen, group dynamics are expected. It ran for ~55 minutes. It's strange and hypnotic; unending; you hear beats that are not written but develop amongst the various interacting lines. It all works and grows and fades and eventually ends. I could pick out some lines easily enough, especially when an instrument was prominent. I suggested to Tom Fell that the 1 moves, but he replied there is no 1. I expect both are right; every snippet has a 1, or at least a start, and every beat is someone's 1 even if there's no formal time signature. I noticed Tom and others were tapping feet. Whatever, it's mystical and hypnotic and it's interesting to read with the music in front of you. I identified most lines but there were ones I missed, including the long 35. I guess because it was less repetitive, so less evident and seemed to merge with the rest. But it's a fascinating exercise and formative and attractive minimalism. Nice one.

Charles Martin led a performance of Terry Riley's In C in the Band Room and streamed to the Net for the Worldwide day of In C on the 50th anniversary of the piece.