A world of recorders 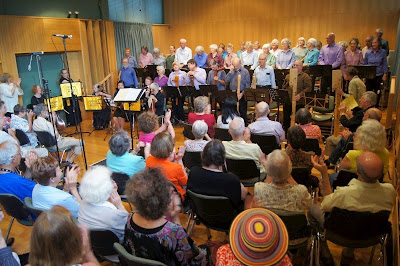 It's a strangely welcoming sound. This was the U3A Recorder Orchestra performing at Wesley and there was an absolute motza of people on stage and another row or so in front. There was also an audience to match, presumably friends and family, and these can be a big group with such a large set of performers. But what got me about this was the organ-like tone. Recorders are seen as a modest instrument, although director Margaret Wright says they are demanding to play. Every instrument has its own strengths and weaknesses and places its own demands. The recorder seems modest and at least amongst the smaller incarnations, it is. It's a whistle mouthpiece with a body that sounds chromatic notes. I realised the tone is actually just like an organ, mostly like the steam organ, the caliope, but sometimes more majestically, like a smaller pipe organ. It has the same attack and decay and presumably the sine-wave purity. So all together, in various sizes, they make a similar sound when played well and in concert, and it's pretty and pure. Absurd, maybe, given one organist can play all that sound and more, but great as a communal activity and really quite lovely. I expect it's very hard to get the unity of conception and performance but when it came through here it was satisfying.

Another thing, Canberra's recorderists, and perhaps the whole recorder orchestra scene, seems to be on an international circuit. Margaret runs an organisation that takes performers from nil to Nardini using the range of instruments and it's a big group with multiple components. [BTW, Margaret's group is not alone: there's another recorder outfit in the ACT, CREMS (Canberra Recorder and Early Music Society)]. I attended another concert of this orchestra where they played a composition written for them by English composer Steve Marshall. One composition this day was written for the Colorado Recorder Orchestra. I imagine these groups know of each other. For such a mild-mannered instrument, there seems to be a real scene here. And the strange box-like new form of the tenor and bass instruments confirms there's innovation amongst respected tradition.

This concert comprised a Gabrieli Kyrie, a set of three Renaissance dances by Susato, selections from Mendelssohn's Italian symphony (no.4), a modern tone poem called Mountain mosaic and written by Glen Shannon for the Colorado Recorder Orchestra and Biber Sonata pro tabula. The Biber was written for string orchestra and recorders and was accompanied here by the Four Bridges String Quartet plus one. The repertoire remains strong on the early era, and this is stately and dignified and fits the instruments. But the tone poem was quite a variation, starting with paired interacting recorders (perhaps alto and tenor?) then moving through contrasting colours and moods to portray a visit to a mountain, from sunrise, through birds and journey and wildlife and a nap and a climb and stars and rain and a return to sunset with that same pairing of instruments. The Mendelssohn, too, was diverse, jaunty with a sustained crochet bass line (like walking bass, but without the jazz feel) and with structure. But with my limited awareness of the field, the baroque and renaissance courtliness and joviality seem most attractive. The Gabrieli was dignified and devotional. The dances were innocent until the simple drumming appeared. The Biber was my favourite with its interplay with strings and its compositional development.

It's a very different world from jazz but a fascinating byway in Canberra. Margaret Wright (musical director, conductor) runs the U3A Recorder Orchestra.
Posted by Eric Pozza at 3:45 pm

I enjoy recorder concerts, partly because I enjoy much of the music they are suited for (like early music). I think I've heard CREMS in the past. We've heard Genevieve Lacey a couple of times. A lovely exponent of the instrument..