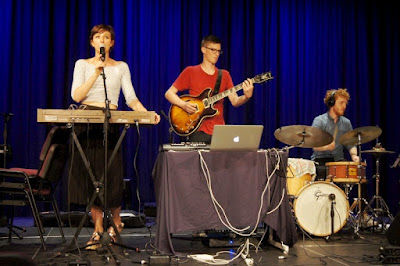 These guys are all jazz trained but I had no expectation to hear Jazz. That's how things are these days. I like it like that. There's a catholicity in music and especially amongst young trained jazzers and it shows. This was Matilda Abraham with Carl Morgan and, at the last moment, as he was in town from Berlin and his other gig was called off, Aidan Lowe. I also like this like that. Jazz trained performers are, well, trained, so Aidan could get called in to do an indie-pop set with complex written syncopations, some of which he'd have to introduce, and do a perfectly capable job. But this was Matilda's show. They were mainly her originals, in a Triple-J style that I call indie or maybe experimental pop.

This was underlying sequenced instrumentation and even harmonies with voice and additional keys and bass or guitar and drums overlaid for the immediacy that make live music live. Matilda's writing is personal, often venting emotions, clear in intent although I didn't catch all the lyrics. One told of annoyance after a bad party; another a feminist line against Abbott as Minister for Women; (aside: Abbott's gone so recently but I can hardly frame the ignorance of slogans and attacks on the weak that he represented - and his complete lack of self-awareness suggested by his recent claims to good government; a dangerous man beyond an idiotic manliness); another feminist song entitled Fill the sink; an intimate love song to a Monk tune (I wonder how singers can so expose themselves through the intimacy of love songs). There were some more complex tunes, some covers - The Bird and the Bee Lifespan of a fly, Nate Wood Ocean floor, Julia Holtor When the sea calls me home (nice line this: "I can't swim, it's lucidity / so clear"). There's both an evenness and honesty in the music that Matilda writes and also in the covers she selects. There were odd times and odd beats and time changes and even a few slowish disco grooves. There was some great playing in accompaniment and just one solo each from Carl and Tom Fell, who sat in for a fat bluesy solo on the final tune. Both solos were beautifully stated, superbly developed and neatly released at the end. Aidan was just stunning to take on just a task at such short notice. And Matilda spoke to us with truth and purpose and some great song-making and an even, clear voice. A poorly tuned piano was a disappointment, but she soldiered through this. I'm enamoured by the moves of well trained jazzers into popular fields, with indie like this the most authentic. This was short songs of the 3 minute variety with intelligence and purpose and deeply attractive beats and some refreshingly twisted melodies. I may stick to RN and BBC for my radio but I loved this live.