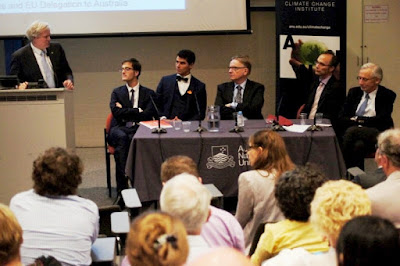 I write this only a few days after the end of the Paris Climate Change convention (more formally COP21 and more). My despair over climate change had smouldered for a few months leading up to this event, obviously hoping for some positive outcome, late as it would be. Through the 2 weeks, the messages seemed to be good. In the end, there was much cheering and satisfaction. This looked positive, although there were nay-sayers too, on both left and right. There was even a staunch denialist letter to the Canberra Times arguing the cooling line, as I remember (it makes you wonder, but Trump is also unseemingly popular). I read some articles, but largely awaited this event at ANU. The event was "Deciphering the Paris Climate talks : where to next?" coordinated by the ANU Climate Change Institute featuring 5 people (all men, noted by several woman around me) who had attended Paris, so this was informed. They were: Assoc Prof Frank Jotzo, Dep Dir, Crawford School, Dir, Centre for Climate Economics & Policy; Adj Prof Howard Bamsey, formerly Australia’s Special Envoy on Climate Change; Luke Kemp, lecturer and finishing PhD student at ANU with a focus on climate negotiations (the young one); Doug McInnes, Dept of Foreign Affairs & Trade; Alex Gosman, CEO, Australian Industry Greenhouse Network. Chaired by Prof Mark Howden, Dir, ANU Climate Change Institute; introduced by H.E Sem Fabrizi, Ambassador, Delegation of the European Union to Australia; summarised by Prof Brian Schmidt, Leader of the Mainau Declaration on Climate Change (and soon to be ANU's VC, and our fave local Nobel prizewinner). A powerful team, it must be admitted! Each spoke for a few minutes, then some questions, then the summary. The session didn't summarise the agreement so much as talk of why and how success was reached and suggestions for what was now required. Here's my summary.

There were three elements for the successful outcome (and it is certainly seen as successful): Ambition (<2degC, targetting 1.5degC); commitment (transparency through INDCs, 5-yearly reviews, regular overall reports and a mechanism to ramp up ambitions by individual countries); solidarity (support for developing countries and the commitment to $100b pa transfers). The success was a function of France's "masterclass in diplomacy" (day 1 commitment by heads of government then transparent, inclusive shuttle diplomacy; a multilayered approach; good planning with a tight team; the writing and release of the draft then final texts). Also, the involvement of the USA ("a vindication of Obama"); Kerry's "masterful intervention"; the pre-G20 US/China deal that so flummoxed Abbott as "instrumental"; the behind-the-scenes bilaterals. But also important was the "alignment of the stars": Trudeau cheered for "Canada is back"; Australia "in from the cold" and winning only one Fossil of the Day award (oddly, a good result!); Obama not Republicans, more. And public scrutiny: all public events being televised thus limiting negativism and promoting positive ambition; the Paris Action Agenda of commitments by 800 businesses and NGOs. Amusingly, there was talk of calling the Pope to speak to the one country with a flag up approaching the final gavel, but he was unavailable, in Mass. It was recognised that this agreement comes nowhere near 2degC (I read variously 2.7-3.5degC) but it codifies existing efforts, sends signals to industries and commits to a mechanism to ramp up action. There's a certain optimism here, but it's reasonably founded and the outcome is more than might have been hoped for. A carbon price was not included (but that's a domestic decision) and neither was decarbonisation mentioned in the text (but it's an inevitable implication). The INDCs (Intended Nationally Determined Contributions) are not legally binding, but the process of 5-yearly reports and ramped up actions apparently is binding and the burden of change has been shared to some degree by all parties, developed and developing. It was "heartwarming" that Australia was back in the process and apparently we did good work, even Greg Hunt (who would'a thunk it). The plan is for net zero emissions by end-century (or was it 2050?) and this requires all manner of actions to be used, including carbon sequestration (although I imagine that's an increasingly relatively costly option). ACT presented well as a subnational government but most others displayed good intentions and talk rather than action. Carbon Tracker ( http://www.carbontracker.org/ ) is a useful incentive for divestment and BHP did well by publishing its carbon risk; carbon risk will become increasingly recognised by business. Brian Schmidt observed that "humanity is pretty good at close problems (eg, nuclear war) ... this is long term, therefore a great achievement". That this is a framework but there are challenges ahead. That technology will be important but also the social sciences and humanities. That the ANU Climate Change Institute does great work. That this is the defining issue of our times and that it requires coordinated, long term generational effort without immediate gain (mmm, that's a worrying thought).

So it's clear that Paris was a great achievement but there's still plenty of work to do and possibility of failure and, despite the worthy target, we may not win. I still mull over the ~2.1degC positive forcing in place against the ~0.7degC negative forcing and how this fits, but the broad scientific view appears to be that there's still hope to avoid runaway climate change. That's the biggy: when the positive feedback loops start up and we lose the ability to turn things around, when those tipping points are reached, then it's game over. Paris suggests we may not get there: it seems there's hope yet. And then there are the denialists who will presumably still rant away. That should be frustrating but increasingly just an amusement for the rest of humanity.

An important and useful report, thanks.