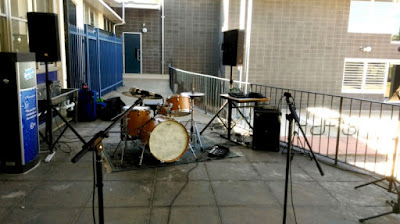 This was tons of fun. Wayne Kelly and Tom Fell sat in with Dave and me for another night at Red Hill Primary School. It's a twice-a-year get-together for parents and kids with sausage sizzles. We play on a deck and kids romp around and parents chat and eat. Much more fun than you'd expect. In fact, a worthy indulgence. Wayne set a cracking pace so it was hot from the top. There's lots of power and invention and good cheer in this man. Tom's tone was there with legendary fatness and plenty of tightly developed solos. Dave pulled grooves from his collection (not least a mean New Orleans funk) behind a few songs from Wayne and I found at least one nice new sound from a new multieffectory toy. That brought a very synthy response from Wayne for a later solo (what was it, pitch wheel on clavinet?). Big sounds, lots of driving grooves, ballads not very balladic, plenty of solos, sometimes loose but always mightily energetic. Great gig. Thanks to all. Too busy to get a pic.