The unity of performance 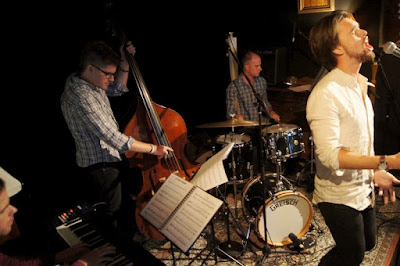 Well, Liam Budge was not so uninfluenced by improvisation and instrumentalism, but it serves as a neat counterpoint to Tom and his mates the night before. Liam Budge returned to Canberra for a gig at Smiths. This was the complete performance, a merging of patter and songs and thoughts (thoughts of love or migration with a smattering of tongue in cheek standards), of instrumental heights through solos and the most exquisitely detailed and driving backing.

I had been chatting to a jazz piano mate about his recent interests, how he'd returned to songwriting from improv (not denigrating either, but enjoying a change), how a beautiful melody denies embellishment, so I was thinking on these lines. But I was unprepared for the first notes, driving groove from the first dot, calm but pregnant with power, then a light intro voice line, then a song of love and ongoing growing power, then into a neat, quiet solo from Luke and everpresent insistent groove from Tim and Tom. I was floored from the first bars. The night went on like this, a complete performance. Luke playing quietly in the background, chatter from Liam, interesting tunes, some known, either Liam's earlier songs that we'd heard or standards or new songs previously unheard. Interestingly, and not surprisingly, the newer ones seemed less distilled, but that's the essence of new. Their time will come with time. This was not a long performance, but it was engrossing. A very different approach to performance. I forgot to mention Beryl, a continuing theme for the night, or the standards that did appear (old cuties Bye bye blackbird and Squeeze me don't tease me and an airy take on There will never be another you; and a Tom Waits cover). Or about each muso, but the performances were so gelled that it's hard to highlight anyone of them. All wonderful; all so nicely in synch. A complete package. And nice to be back at Smiths.