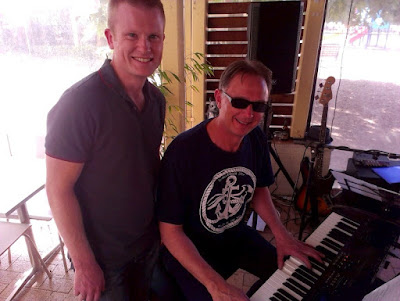 Tilt played a gig at Adore Tea and we were pleased when Paul dal Broi turned up. We were playing well enough so that's OK. It's a relaxed gig and its considerable fun. Nice to play a gig like that. And nice that Paul came to a gig like this. Paul was James' teacher for yonks so there's water under that bridge. Otherwise, Paul is a local jazz identity, much respected by me and others. G'day Paul. But what about the gig? Pretty standard: standards, latins, some pop numbers, a few originals. We are still developing consistent takes on some numbers, but the grooves are rock solid and the funk is bouncy and the swing is driving and all the grooves are tight as. I enjoy the space for numerous solos (what do they say about bass solos, again?) and playing e-bass is an indulgent release after practice and performance on double. Finger style can be so, so machine-gun rapid and so extravagant. Then there's the traded fours and more extensive drums solos and James ever leading with head and first solos. All nice and much entertainment for the band and we wish for the audience. All finished off with a few songs, some gloriously pretty Beatles and grungy Nirvana and stories of walking the dangerous streets of New Orleans. Jazz as taking life is ones' hands. In NOLA if not so much at Adore.