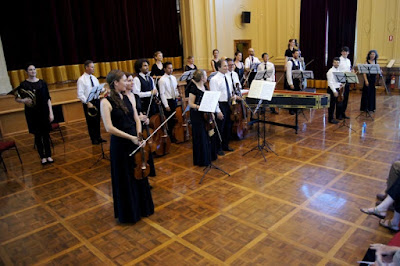 It was the dynamics that most impressed me about Australian Haydn Ensemble this time. I've seen them as a smaller group, perhaps 6 players, and once or twice in a larger format. This was probably the largest I've seen: 22 players. But I know how difficult it is to concentrate on dynamics when you are struggling to catch the notes but it's essential and it worked gloriously here. Detailed, gentility, gentleness, the quietest of passages, the frequent glances that make all this happen. I could see this, up close. There's no conductor, of course, so those glances go to the concertmaster, in this case Canadian Marc Destrubé, or to the co-director, Eric Helyard on harpsichord for the night. The other thing I melted over was Jacqueline's bass lines, rapid and clear as they were demanded, disturbingly easily played. But I'll give you that that's a concern of a fellow bassist. Perhaps not just me. Bass is a strangely popular instrument and I noticed several people eyeing off Jacqueline's aged bass in the breaks. But the fast lines in the final presto movement of Haydn's Le soir, Symphony no.9, were stunners and she played them out with aplomb. It wasn't just bass, of course. Bassoon was wonderfully expressive at times, even once in a duo with bass; the baroque horns were mightily satisfying, so much more than modern brass, if only for this outing. Marc Destrubé's subtle and delicate phrasing was a telling lead. And the flute of Melissa Farrow for her parts. All delicate, detailed, precise, understanding, dynamic. I loved this concert: one of the best of the AHE. The period tones right for this music; the place right, being Albert Hall, our oddly monarchical place that hosts carpet sales and mineral displays and any fine music that warms to the rich reverb. So, what did they play? A string of pieces from the orchestra of the Esterhazy Palace. I'm told they were originally played with a smaller ensemble but expanded here. All Haydn: Symphonies 6,7,8 (Le Matin, Le Midi, Le Soir) and the Harpsichord concerto in D major featuring Erin Helyard. The harpsichord was a somewhat lost in this space, despite Erin's always vibrant and immediate performance (at least from where I was sitting, although not in the recording I made form a more central location). All on period instruments, of course: gut and valve-free horns and different bows, all soft and tender in tone. This outfit will be recording soon, I think for ABC. Expect a well developed and nicely understood performance. These are mates of mine but also greatly admired.