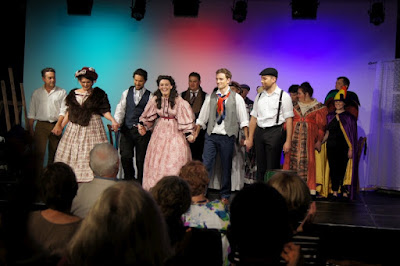 I recently discovered a new company around town, Canberra Opera. It's another community organisation, small scale attempting big things, supporting the development of singers and performance of opera in Canberra. Their latest production was La Boheme, staged with piano accompaniment at the Ainslie Arts Centre. Not a big production in a big hall with orchestra, but the real thing nonetheless. Four acts; presumably all the parts and lyrics and music and a full evening's outing. I warmed to the duo of Puccini's Suor Angelica and Gianni Schicchi when performed a few years back by ANUSM then struggled with an Australian Opera performance in the Sydney Opera House sometime later. I thought it was time to revisit opera. But I'm afraid, despite an Italian background, I find it difficult to warm to the theatrical device that is opera, this story no less than others. But many do. I did enjoy aspects of this performance, though, not least the two strong performers playing the two key female parts, Louise Keast as Mimi, seamstress dying of consumption and loved one of poet Rudolfo, and Karen Dalzell as flirty Musetta, old flame of painter Marcello. Congrats also to pianist Kathleen Loh who played unceasingly throughout the full performance and even between acts. And cast and company.