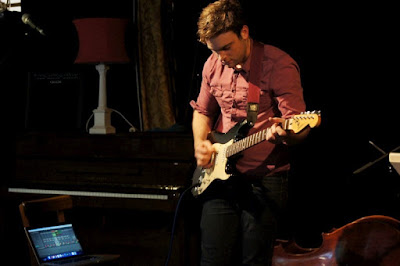 Mother Jack were sandwiched by two performances at Smiths. It was a veritable feast of music for a lowly $10. I guess this is how these cafes present their music, although I have no idea how they pay their musos. But thus has been the way of musos for some time. Before MJ was Chris Finnigan appearing as Fossil Rabbit. Chris played a solo guitar (Squier strat) with all a raft of foot switches and loops and a laptop to the side. It's not a music of instrumental virtuosity so much of feel and mood and presence. I like the drone-like continuance, the minimalist change, the relationships created in short-term recorded space. From a jazz perspective, this is a strange world, but it's involving and contemporary. I like it.

The other slice of the sandwich was a choir formed at ANU (at a least they practice there), SATB, vibrant and attractive, only new but already with a few performances under the belt and even a half-page write-up sometime in the Canberra Times. But I couldn't stay so I still wait to hear them.

Three bands; $10. A steal, maybe also for the musos. Chris Finnigan (guitar, electronics) was Fossil Rabbit. I missed Choir! (yes, with the exclamation mark).
Posted by Eric Pozza at 9:03 pm