The world seen from Finland 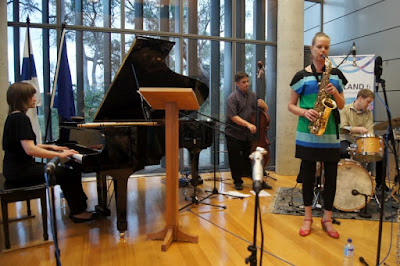 Kokko seems a strange name for a Finnish band, but Kokko Quartet it was. I liked it lots. This is a fairly young quartet performing music that they've written (three of four had written for the band). It was all original compositions, other than two short Finnish folk tunes for an intro and encore. They displayed a breadth of styles in composition and performance with a generous sprinkling of latin grooves. Thus Kokko, perhaps. But as I said, I was enamoured with this band. Kaisa, our front on alto and occasional soprano sax and flute and bamboo flute, played calm and melodic with a delicious alto tone: not shredding, but thoughtful, purposeful. One of her tunes was about hearing a train while in India (she has obviously travelled well, with tunes about India and China) and the tones she drew from the sax were deliciously evocative of passing trains and blown horns. Against this, Johanna's piano was a great pleasure.

I thought of the frenzied atonality of Myra Melford at times although the dissonance was not so thorough, chromatic sequences, sidestepping or just big handfuls on mostly tonal notes, but the excitement was exposing itself. I loved this frenzied tonality against the Kaisa's carefulness. Behind was a firm and insistent rhythm section, bass and drums, with several bass solos and some occasional flurries from drums. But it was the compositions that I most enjoyed: changing times; frequent latin feels and one solid samba from bassist Timo; really effective story-telling or picture-forming; a few tunes from Johanna in response to Finnish myths mentioning forging swords and the like (the long focus is evident: not something we white Australians understand or can in any way lay claim to). They are young but the band's been developing for five years and it has character. Maybe it was the cosmopolitan feel of it all that I so warmed to, well structured and worldly and with a nice balance of neat and ecstatic. Much enjoyed.