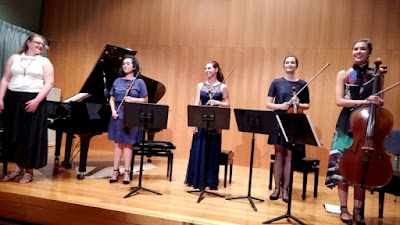 The Foray Quintet was formed at a music camp to play Fauré but times change and people move, especially after tertiary training. They are now spread from Sydney through Canberra to Melbourne, so getting together is not easy call. Their preparation was solo practice and a few weekends together and the music was challenging, but what a gig! This was the first of an East Coast tour. The music was one Fauré, his Piano Quartet Cmin Op.15, an early work, along with a world premiere, James Madsen Piano trio "A quiet fanfare", and a work of immense action and plenty of technical challenges, Erich Korngold Piano quintet Emaj Op.15. Korngold is known as a film scorer, and I could just imagine cartoon spills and chases in his music. Kimberley suggested he put all his ideas together and there were certainly lots of ideas splashing one over the other, but it seemed to set together pretty well like a showground ride, all quick twists, unexpected and exhilarating. Before playing, they demonstrated 6 bars with various complexities, glissando, pizzicato, extreme registers, dissonance, trills, but when that segment popped up, it was surrounded by more, not least artificial harmonic glissandos and chromatics. Exhilarating. Even the quieter, slower second movement had the ring of film, dramatic, emotional, immediate. Despite his film-score reputation, Korngold was an admirer of Mahler and the like. According to Kimberley, this was the most difficult and satisfying piece the quintet has played. And for the Madsen trio, I was surprised it had sat on a shelf two years before its premiere (it's always a frisson to attend a world premiere). I liked it, through rolling chords on piano with attractive melody passed effectively between violin and cello, then to a middle of doubt or questioning or uncertainty, then to return to the daily grind of chords and melody. Satisfying. And the outfit was great, attacking the Fauré with ease, comfortable time, good pitch. The Korngold was more a challenge, but played with relish and chops and some good humour around the most tricky bits. Very well done and a seriously interesting program.