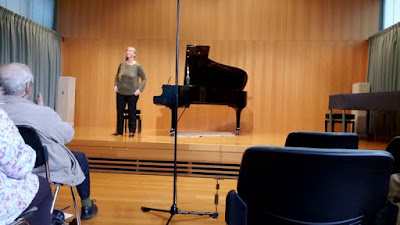 More chalk and cheese. I've heard of Margaret Legge Wilkinson for some time, but I'm only just now writing her up for CJ. She played for a lunchtime concert at Wesley. The chalk was Bach; the cheese was Messiaen. Both fabulous musics, but as diverse as they come. Margaret played the Bach with considerable consistency so a little variation goes a long way, except for those final phrases where lots of rit is not too much, and just occasionally a little variation within the piece. There are terms for this that I've only discovered recently in baroque context . One is "French style, slightly inegale" (in this case, for how you treat a row of quavers). Another was "tripletised" (for a string of dotted quavers with leading semi-quavers). I thought maybe some dotted notes in one Prelude and Fugue may have been more tripletised, but that's interpretation. But the regularity of all this makes great demands on the player, to pull off the multiple contrapuntal lines with sometimes tack-sharp consistency. The Messiaen was different. Not that arch-consistency of repetitive rhythms, but more open in rhythm and harmony. This really was delicious music. Perhaps I should especially say colourful here (which it was, in spades) given the instructions from the score that are expressed literally in colours and were read out by Margaret: oranges and violets and grey; mauve to start, moving through silver, gold to a Prussian blue ending. My recall of suggested colours is inexact but the impression isn't. Interpretation expressed literally in colours. I felt Margaret was more at home here with the lightness and prettiness and subtle movements of harmony and various mixed techniques of this C20th music, if only on this day. Nice. BTW the music played was Bach Well Tempered Clavier, Book 2, Preludes & Fugues Fmin, Gmaj, Gmin and Messiaen Selections from Preludes for piano.