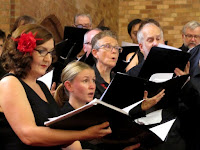 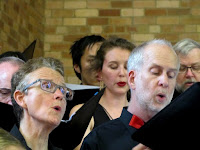 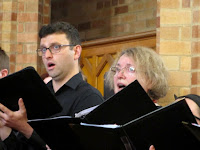 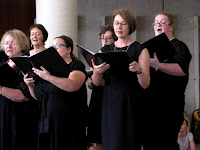 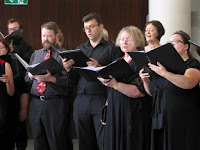 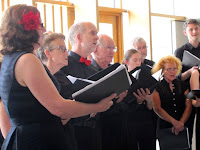 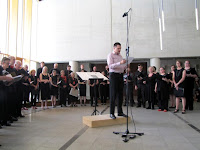 Igitur nos did a double act concert of music of Thomas Tallis. It was just a short concert, but interestingly repeated with just a bbreak of an hour so to travel between venues. The first was at St Paul's Manuka, a church setting fitting the period and the dignified choral style. The second was the foyer at the National Portrait Gallery. Widely different: modern, square, timber and glass and cement. But to talk of this as a duo is inadequate. The main work was Spem in Alium sung by eight choirs of five parts. So think 8 not 2. On the day, Igitur nos was slightly larger again, with 46-or-so singers and musical director Matthew out front conducting. Most presumably went to hear SinA, although the rest of the program was beautiful and delicate. But SinA is renowned and complex, with the singing moving from left-stage to right, choirs 1/2 through 3/4, 5/6 to 7/8 and back again and at various times in tutti mode or otherwise merged. Sometimes, simple voices, perhaps a little unbalanced; sometimes great masses of singing. It's a work to hold in awe, but also to hear frequently to understand. The other works were simpler, presumably SATB or thereabouts, If ye love me, Verily verily, various psalm tunes, Locquanbantur, some personal, some religious. It was a stunning satisfying outing, and especially memorable for the repeat performance. I found I prefered the space and the performance of the NPG. I walked after with one of the singers and she confirmed that: more room, less interference, so singers had heard new things. But it's also the warmup and slight exhaustion of a repeat performance in short time. That settles and brings out emotional sturdiness and I thought it showed here. A memorable pairing.

Igitur nos, under Matthew Stuckings (conductor, musical director), performed the music of Thomas Tallis, including Spem in Alium, at St Paul's Manuka and the National Portrait Gallery foyer.
Posted by Eric Pozza at 10:51 am