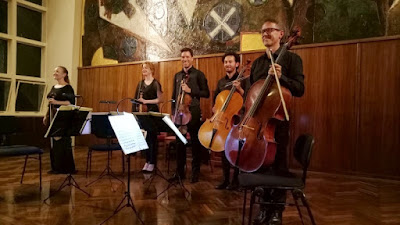 This was an odd concert by the Australian Haydn Ensemble in a number of ways. They mix big with small concerts and this was a smaller one, a quintet. But 2 cellos, a string quartet with double cellos? It's a strange arrangement, but there's music written for it, so it's valid and interesting and strangely satisfying. The two cellos took different roles at different times. One might be playing a bass line while the other plays melody, or unison with viola or even a melody part to respond to a violin or they might just play a line in octaves. So the first item of unusualness was the lineup. Second was the program. Mozart and Boccherini are common names on a baroque program but the works here were different.

The Mozart was Fantasy in F minor, K.504 rearranged for "mechanical organ" and it was a strange thing that held little similarity to the ordered, often light, sometimes humourous music of Mozart. The first Boccherini, String quintet op.25 no.6 Amin, was Spanish-influenced and understandable enough in the baroque context but his op.30 "Night music of the streets of Madrid" was anything but. It was written by Boccherini to be performed only in Spain (the Italians are a proud people!) and not to be published outside. But it was, so we have it. It's a programmatic work, with parts named Ave Maria Bell or Soldier's drum or Minuet of blind beggars or Retreat. It tells a story. It also plays the part. First up, a strong rhythmic passage on one note from first violin; a little later, strummed chords on cellos held on laps like guitars (apparently required by the score); still later, a mad viola bowing on one note representing drums and a very challenging bowing over all four strings on violin 2, repeated a few bars later (I was amused to see Caroline's relief after carrying off each of these!). All strange, not particularly contrapuntal or otherwise baroque-like and very resonant of Spain and Flamenco. Thus oddity of this concert. Another, perhaps, was Cambini, a lesser-known baroque composer with a satisfying but fairly uneventful piece. Good to hear music like this occasionally, rather than just the masters: it gives perspective. So, an divergent but satisfying concert, for the notable playing, the humour and interesting journey, but especially for the strange but informative program.