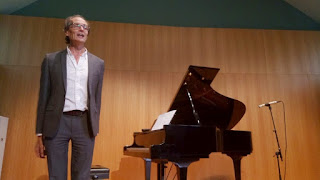 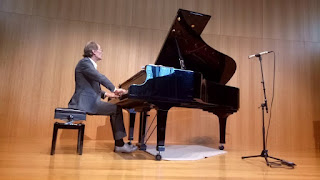 I remain in awe of Roland Peelman and his intelligence and emotionally connected, informative concerts. It amused me when he started to play a snippet of Bach to demonstrate broken chords, then going on to describe them as in narrow position as against wide (or close/open) position as in Spin bird, the composition by Kate Moore that he was about to perform. Then he went on to play Kate's work, somewhat minimalist, regular but changing unexpectedly in harmony and placing of accents. A beautiful work that I found unexpected from Kate's pen. Then on to Erik Satie, with an opening about his revolutionary works, predating simplicity at the time of Wagner, using elegant chords and classical clarity, leading to Debussy and Ravel on the one hand, and later to Stravinsky and Roussel, each time predating the later composers by a decade. The work was his Sonatine bureaucratique, apt for performance here in Canberra and reportedly the only piece in the repertoire on bureaucracy. Also how Satie wrote text for the performer on the score, so the Allegro is about walking to work, the Andante about thoughts of promotion and salary, and the Vivache (a neologism from vivace and vache=cow) including the return home and hearing Clementi in the background. A lonely, quirky, troubled man but a revolutionary portent. Then to finish on Schumann's Kinderszenen=Scenes from childhood. This was the full 13 tunes, mostly run up together, intriguingly picturing the life of a child, bookended with thoughts of adults. Delightful, deliciously played and a significant emotional commitment. It was telling to watch Roland's quietness after this piece as a measure of his involvement in the performance. I could only smile and appreciate the dignity. Here is a musician of great intelligence and commitment and readiness to share. A telling concert from a musician I hold in great esteem.