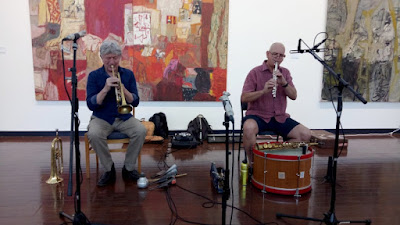 It was an afternoon of two concerts and how different can two concerts be? First up was free improv at the suitably live Drill Hall Gallery with Richard Johnson and Miroslav Bukovsky with Rhys Butler sitting in for the shorter second set. It's an interesting combination. Miro as the more melodic player led Richard to play melody as I've never noticed from Richard before; later Richard led Miro to play clicks and pops as he will on these occasions. I hadn't noticed Richard playing a flute body with sax mouthpiece before, but it worked a treat, sharp with tack-like valves and effective tonality.

Miro moved through trumpet and flugelhorn and percussion; Richard also played sax, often into a drum skin, with and without mouthpiece. I found this a particularly successful outing in the open, free, unplanned style. The second set was shorter, with Rhys on alto mostly playing various noises, long notes, clicks and the like. The aircon was a problem with perceptible background hiss against the quieter parts: apparently it can't be turned off. But a very successful outing for an appreciative audience.

Richard Johnson (soprano, flute) played free improv with Miroslav Bukovsky (trumpet, flugelhorn, percussion) at the Drill Hall Gallery. Rhys Butler (alto) sat in for the second set. The concert was in the context of an exhibition by Elisabeth Cummings.
Posted by Eric Pozza at 3:26 pm